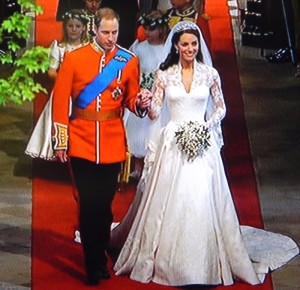 The wedding of Prince William and Kate Middleton

Today’s Royal wedding of Kate Middleton and Prince William has been the happiest of occasions. In both real life and fiction weddings symbolise harmony, and the marriage of the main characters, usually following a troubled courtship, is a satisfying end to any play or novel.

The two Kates who marry during Shakespeare’s plays have very different stories. Princess Katherine is the Princess of France who is married to the victorious Henry V at the end of the play of the same name. She has no choice but to accept this diplomatic marriage, but Shakespeare writes a wonderfully charming wooing scene to allow the play to close on a celebratory note. None but a killjoy would try to turn Kate into merely an unwilling pawn in the political game even if that was the historical reality.

The second Kate is the shrew in The Taming of the Shrew. Here, it’s not the courtship, but the marriage, that Shakespeare puts under the microscope. This Kate has a nightmare nuptial. Not only is she forced to marry a man she doesn’t love, who we know to be after her money, but her groom takes the opportunity of the wedding itself to humiliate his bride. The wedding day, of course, should be the bride’s big day, but Petruchio is firstly late, then turns up dressed outrageously. During the wedding itself he behaves in a way which might be acceptable at the stag party, but not on the day itself. To cap it all, he carts Kate away before the reception.

I vividly remember the way in which this scene was staged in the 1978 RSC modern-dress production directed by Michael Bogdanov. Paola Dionisotti, as Kate, wore a conventional wedding dress, and was kept waiting by Jonathan Pryce as Petruchio who took every opportunity he could to live up to Shakespeare’s description. It was a very Shakespearian moment, hilarious and heartbreaking at the same time. We find the methods Petruchio uses to tame his shrew unacceptable today, but we may concentrate too much on them rather than recognising that Shakespeare is asking questions about what marriage is really about, and how two very different people make a life together.

Perhaps it’s because weddings in Shakespeare’s plays so often end in disaster that the belief began that Shakespeare’s own marriage was unhappy. There’s little evidence either way, but according to historian Mairi Macdonald, the second best bed that Shakespeare’s widow was left in his will really doesn’t indicate anything about their relationship. Germaine Greer, in her book Shakespeare’s Wife, suggests that Anne Hathaway had a far more positive role in Shakespeare’s life than has been supposed.

We all wish the newlyweds every happiness, and that they manage to escape the tribulations of some of Shakespeare’s married couples.

5 Responses to Kiss me, Kate