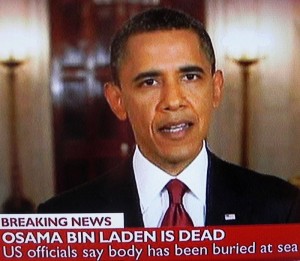 Watching President Obama make the official statement about the death of Osama Bin Laden, it was impossible not to be reminded of the Earl of Richmond’s speech at the end of Shakespeare’s Richard III. I almost expected him to say “The bloody dog is dead”. Obama, like Richmond and like every politician in circumstances such as these, talked about justice having been done, the need to heal wounds, and voiced the hope that a lasting resolution may have been reached. Richmond’s “God say Amen” found a close echo in Obama’s “May God bless the United States of America”

Shakespeare was writing about many decades of civil unrest that took place on English soil, but modern international terrorism has resulted in the deaths of thousands of citizens of all countries and all faiths. The result of these conflicts is the same:

The brother blindly shed the brother’s blood;
The father rashly slaughter’d his own son;
The son, compell’d, been butcher to the sire.

The story of Richard III was the finale in Shakespeare’s line of history plays – he ended the play diplomatically predicting that under Richmond, as King Henry VII, peace would follow. In fact he founded a political dynasty which culminated in the reign of his grand-daughter Elizabeth I, during which Shakespeare wrote his eight great plays documenting the Wars of the Roses. The central theme of these plays is the cyclical nature of history. One unjust ruler is deposed, to be replaced by another who is quickly vehemently opposed. Another uprising follows and is put down, to be followed by another more successful coup, and so it goes on from the reign of Richard II right up to Richard III. Hoping for a period of peace Richmond prays:

Abate the edge of traitors, gracious Lord,
That would reduce these bloody days again.

Tonight, another of Shakespeare’s political plays, Macbeth, is being performed at the Royal Shakespeare Theatre in Stratford-upon-Avon. At the climax of the play Macduff, a man whose family have been slaughtered on the commands of the tyrant Macbeth, leads the raid to kill him in his castle stronghold. Tonight of all nights, the audience watching this performance will be in no doubt of Shakespeare’s continuing relevance.

2 Responses to Obama and Shakespeare