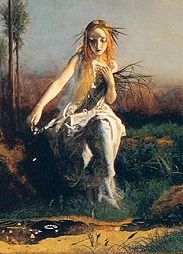 A detail of Arthur Hodgson's painting of Ophelia

I’ve never had a lot of time for the myths and legends that surround Shakespeare’s life, many of which probably sprung up in order to satisfy the curiosity of visitors wanting to find out more about the man. I’ve always assumed the supposed inspiration for the drowning of Ophelia in Hamlet to be one of those, a story without any real evidence to support it. But on this sunny spring morning I took a walk up the Avon in search of a willow growing askant this stretch of river.

Why the change of mind? I recently re-read Edgar Fripp’s book Shakespeare’s Haunts near Stratford, published in 1929. Fripp spent years searching the documentary records of the town and local area for people and events that might have been known to Shakespeare. He reports this story, and Samuel Schoenbaum repeats in his own book Shakespeare’s Lives. It runs that a young woman drowned in the Avon, near the village of Tiddington, a mile or so up the river from Stratford, on 17 December 1579. The records of the inquest still exist. The coroner, the Town Clerk of Stratford, agreed that the deceased “Going with a milk-pail to draw water at the river, standing on the bank, slipped and fell in, and was drowned”. The inquest established that her death was a simple accident, not a case of suicide. The circumstances find a strong echo in the description of Ophelia’s watery death in Hamlet.

There is a willow grows askant a brook,

That shows his hoar leaves in the glassy stream;

There with fantastic garlands did she come: ….

There, on the pendent boughs her coronet weeds

When down her weedy trophies and herself

Fell in the weeping brook.

At the coroner’s inquest it was important to establish whether the death was a simple accident or a case of suicide.  In the Tiddington drowning the body was taken up from its temporary grave for examination, and if the verdict had been suicide she would have been reburied in unconsecrated land and denied a Christian burial.

Gertrude describes Ophelia’s death as an accident too, but the gravediggers gossip about the rumours:

2nd Gravedigger: Is she to be buried in Christian burial when she wilfully seeks her own salvation?

1st Gravedigger: I tell thee she is. Therefore make her grave straight. The crowner hath sat on her, and finds it Christian burial.

They go on to talk about the meaning of suicide by drowning:

It must be se offendendo. It cannot be else. For here lies the point: if I drown myself wittingly, it argues an act … Here lies the water – good. Here stands the man – good. If the man goes to this water and drown himself, it is, will he, nill he, he goes, mark you that. But if the water come to him and drown him he drowns not himself. 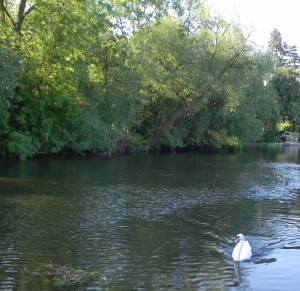 Willows growing on the river banks above Stratford-upon-Avon

There are plenty of willows growing along the river in and near Stratford, just as there are along many of England’s rivers. Sadly for me, though, the willows are now regularly cut back in order to keep the banks tidy and the river clear for the many boats that use it, so the photo, taken upstream of the town, is the best view I was able to find.

Fripp and Schoenbaum are keen not to assume too much for this story, but the 15-year old William Shakespeare would have heard it and it could have come to mind years later. The name of the girl who drowned, in a spooky coincidence, was Katherine Hamlet. 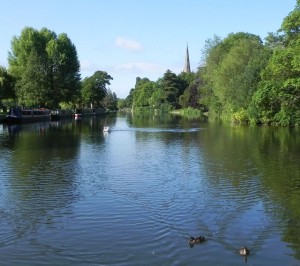 This entry was posted in Plays and Poems, Shakespeare's World, Stratford-upon-Avon. Bookmark the permalink.

8 Responses to Shakespeare’s Avon, Act 2: The inspiration for Ophelia?