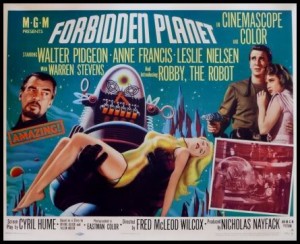 It’s hardly surprising that Shakespeare’s play The Tempest has been used as the basis for science fiction. A ship and its crew are wrecked on a distant, mysterious island, populated only by a man with magical powers, several strange creatures who act as his servants, and his daughter. The ship’s crew break up into several groups who interact with the island’s inhabitants, upsetting the status quo and threatening to overthrow the magician. This story of how people relate to and govern each other could and has been easily relocated from the strange and exotic island to a host of fictional settings.

The British Library’s new exhibition, Out of this World, is an ambitious look at the history of science fiction, tracing its roots back Shakespeare’s period and even beyond, to books not normally categorized as science fiction like Thomas More’s Utopia.

The Culture Show’s programme traced this history, including a discussion of the first work of science fiction in English, The Man in the Moon, from 1638. Interviews with curators pointed out that like much other art, science fiction is rarely about what it appears to be on the surface. The best science fiction wrestles with the place of the individual in society.

I don’t know if the exhibition includes any references to Shakespeare, but this theme certainly finds expression in The Tempest. On his arrival on the island Prospero has set himself up as the ruler of the island, turning its existing inhabitants into his servants. Caliban complains

I am all the subjects that you have,

Which first was mine own King: and here you sty me

In this hard rock, whiles you do keep from me

Among the shipwrecked courtiers is Gonzalo, who dreams of another kind of government. “Had I plantation of this isle … and were the King on’t, what would I do?”, he asks. He suggests a commonwealth where all would be equal:

And use of service, none; contract, succession,

All things in common Nature should produce

Without sweat or endeavour: treason, felony,

Sword, pike, knife, gun or need of any engine,

Would I not have.

The science fiction film Forbidden Planet was released in 1956, loosely based on The Tempest.  The Ariel parallel, Robby the Robot, was the first movie robot to become a hero in his own right. There was no Caliban in the film but an evil force “The Id”, was created by the writer Irving Block because “There are real monsters and demons inside each one of us, without our knowing”, a sentiment which forms the basis of Macbeth.

Shakespeare’s plays are almost all given an unfamiliar setting, in either a far-off country or a safely distant period of English history. This enabled Shakespeare to write safely about current political concerns, but contemporary parallels were not lost on his audiences. In 1601 the Earl of Essex paid for Shakespeare’s company to perform the play Richard II, in which the king is deposed, hoping that the performance would rally support for the Earl’s rebellion against Queen Elizabeth. The play is comfortably set well in the past, but the connection was inescapable. The Queen is said to have responded “I am Richard II, know ye not that?”

The theme of the individual in society is discussed in another of Shakespeare’s most political plays, Hamlet, and sure enough the play is raised in science fiction.  The television series Star Trek has made repeated use of Shakespeare’s plays and produced many spin-offs included the wonderfully tongue in cheek translation of Hamlet into “the original Klingon”. Shakespeare and science fiction was also the subject of a post written in 2010 as part of the Shakespeare Birthplace Trust’s Blogging Shakespeare.

This entry was posted in Legacy, Plays and Poems and tagged British Library, exhibition, Forbidden Planet, Hamlet, Klingon, Out of this World, science fiction, Shakespeare, Star Trek, The Tempest. Bookmark the permalink.

6 Responses to Shakespeare and science fiction