Sounds and sweet airs, that give delight 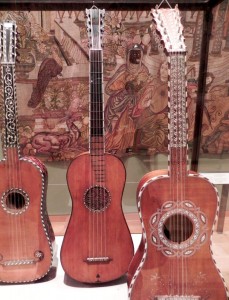 Early guitars on display in the Ashmolean Museum, Oxford

It seems that music, whether being listened to or performed, really is good for you. It was recently reported that musicians have better memories than the rest of us, and playing music may result in higher levels of proficiency in maths and foreign languages. We all know that music can change mood. Scientific research has found that music appeals to the most primitive part of the human brain, the cerebellum, which is responsible for emotion.  The brain breaks down music into different elements: pitch, rhythm, melody, harmony, tempo and metre. When language, in the form of words, is added, the meaning of the words is processed at a higher level by the cerebral cortex.

But hold on a bit. Pitch, rhythm, tempo, metre…. Aren’t all these features of poetry? Isn’t it possible that listening to poetry can affect the brain in the same way as listening to music, using that primitive, emotional part of our brains? This website explains the ideas in layman’s language.

One of the barriers to studying Shakespeare is the concern that the words are difficult to understand. If it’s the musical qualities of poetry that primarily appeal to our emotions perhaps actors, audiences and readers should stop stressing quite so much about intellectual understanding and let the sound wash over them.

I remember hearing Alex Jennings, a wonderful stage actor, talking about performing Hamlet. He didn’t worry that he didn’t understand every word, but concentrated on speaking the verse and let the sound do the work for him. An actor’s voice is his most valuable instrument which, when trained, can produce an infinite range of sound. I can still “hear” the elderly actor Griffith Jones performing the opening speech of Pericles, decades after he did it. After a lifetime of training for stage acting he was able to perform Gower’s speech in a way which sounded completely natural but also musical. I’ve heard the speech performed several times since, but have never heard it delivered so effectively.

Without knowing anything about the cerebellum or cerebral cortex Shakespeare seems to have been aware of the difference between music and language. Caliban, in The Tempest, the most primitive of Shakespeare’s characters, expresses a love of music:

The isle is full of noises,
Sounds and sweet airs, that give delight, and hurt not

Language had to be learned:

You taught me language; and my profit on’t
Is, I know how to curse

I was delighted to hear that a symposium is being held in California entitled Where has all the verse gone? Academics have done a huge amount to analyse and investigate Shakespeare from every angle, but sometimes the impact of the poetry on audiences, performers and readers has been overlooked or even dismissed. Paul Edmondson, Head of Learning and Research at the Shakespeare Birthplace Trust is delivering a paper called Shakespeare’s words and music, in which he will explore the musicality of Shakespeare’s language. His post on 12 May explains more about these ideas.

It’s great news that listening to Shakespeare’s poetry being beautifully spoken could be good for the memory. Now, where did I leave my keys?

This entry was posted in Shakespeare on Stage and tagged brain, emotion, Hamlet, music, Pericles, poetry, Shakespeare, The Tempest. Bookmark the permalink.

2 Responses to Sounds and sweet airs, that give delight