The first draft of history? 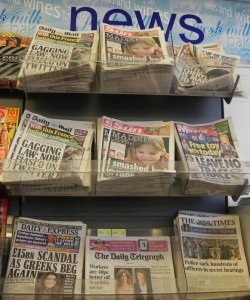 Over the past week the news has been dominated by the killing of Osama Bin Laden. President Obama must have felt some satisfaction that he’d got an authoritative statement out before it was widely reported on Twitter and Facebook, though this report explains how the story began to break. Since then the handling of this major news story has taken on a life of its own.

In the days following the President’s statement, and under severe pressure, Washington issued contradictory versions of events. Questions have continued to be asked and there are now demands for full disclosure.

Veteran journalist Matthew Ingram expressed the difficulty back in February:

If there’s one aspect of the media business that has been disrupted more completely than any other, it’s the whole idea of “breaking news”. Just as television devalued the old front-page newspaper scoop, the web has turned breaking news into something that lasts a matter of minutes — or even seconds — rather than hours.

Journalism used to be seen as “the first draft of history” but what we’re seeing now is rumours running wild through Twitter. Rumour has always arrived before the official or semi-official version of events. Even in Shakespeare’s time, before the advent of newspapers, it travelled quickly. In Henry IV Part 2, the figure of Rumour, the prologue to the play, is dressed in a gown “painted full of tongues”.

Rumour is a pipe
Blown by surmises, jealousies, conjectures

Its inaccuracies are heard more loudly than the truth:

Open your ears; for which of you will stop
The vent of hearing when loud Rumour speaks?
I, from the Orient to the drooping West,
Making the wind my post-horse, still unfold
The acts commenced on this ball of earth.
Upon my tongues continual slanders ride,
The which in every language I pronounce,
Stuffing the ears of men with false reports.

How long will it be before we see a production of the play in which Rumour is represented by people Tweeting on their smartphones?

Even if a full inquiry is held, historians will continue to debate the death of Bin Laden, and  there will never be a single authoritative version. It was easier to arrive at an official version of history in Shakespeare’s day. Publishing was controlled, and although books were becoming more widely available during Queen Elizabeth’s reign, it was relatively easy to ensure that it was the Tudor version of history that was left for posterity. Holinshed’s Chronicles of England, Scotland and Ireland, first published in 1577, then revised in 1587, demonized Richard III, the monarch immediately before Henry VII the first of the Tudors. We now know that Richard was not the embodiment of evil that Shakespeare, following Holinshed’s version of events, portrayed, but Holinshed’s version inspired what was to become Shakespeare’s favourite and most famous villain.

11 Responses to The first draft of history?