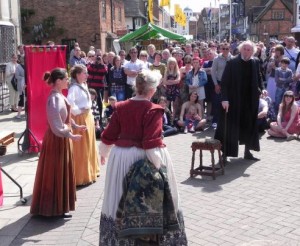 For most of us today, Spain means sun, sea and sangria, but for Shakespeare and his contemporaries Spain had less positive associations. The most powerful state in Europe, already feared and suspected, launched the Spanish Armada with the intention of invading England in 1588.

This weekend in Stratford-upon-Avon, we’re celebrating Spanish culture as well as English. The period during which Shakespeare lived was so artistically rich in Spain that it has become known as the Spanish Golden Age. It’s hardly surprising to find echoes of Shakespeare in the Spanish plays of the period (or is it the other way round?) Among the artistic achievements of this period is Cervantes’ book Don Quixote, sometimes called the first novel. Cervantes was some years older than Shakespeare, but died on the same date, though sadly not the same day because the two countries were using different calendars.

Extracts from Cervantes’ plays are being performed in front of Shakespeare’s Birthplace and this afternoon there is music and dancing in the street. For visitors to the Birthplace there is also a special display, for this weekend only, of material relating to Cervantes from the Shakespeare Centre Library and Archive, mounted by Jo Wilding. Items on display include a 1652 edition of the first translation of Cervantes’ Don Quixote, and copies of the 1728 published text of The Double Falsehood, the play which was claimed to be based on Shakespeare and Fletcher’s play Cardenio. This in its turn was based on a story in Don Quixote, which had first been published in English in 1612.

RSC Director Greg Doran’s re-imagining of Cardenio is currently playing at the Swan Theatre, and is the latest of many Spanish plays to be performed in Stratford-upon-Avon. The play has a complicated pedigree, admirably explained in its own section of the RSC’s website . In 2004 The RSC performed a whole season of Spanish plays including Cervantes’ play Pedro, the Great Pretender. Earlier performances of Spanish Golden Age plays by the RSC include Life is a Dream, performed in 1983. This wonderful play by another Spanish writer, Calderon, toys with the concepts of dream and reality, a theme in Hamlet and other Shakespeare plays.

Shakespeare was part of a much larger European cultural landscape in which cross-fertilisation flourished regardless of political differences. Shakespeare’s Birthday weekend, when people from around the world celebrate Shakespeare’s life and work, is a wonderful opportunity to look from the point of view of another of the world’s great writers.