When shall we three meet again? 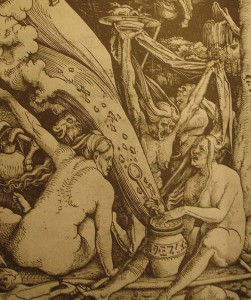 A witches sabbath as imagined in a book from 1510

When shall we three meet again?
In thunder, lightning or in rain?

In a typically fearless decision Michael Boyd, the RSC’s Artistic Director has chosen to open the first brand new production in the newly redeveloped RST without one of the most famous openings in any Shakespeare play –  but then he’s already tempted fate by choosing Macbeth, the play universally associated with disaster.

As a director, Boyd rarely takes the easy or predictable line, and his production of Macbeth, which casts the three weird sisters, usually known as the witches, as children, plays against not just theatrical tradition but also Shakespeare’s text.

There’s no such thing as a standard Royal Shakespeare Company approach to staging these days. The theatrical approach is epitomised by Greg Doran, whose Swan production of the play back in 1999 opened with a complete blackout and loud bang (people screamed), before the play began. Boyd’s approach is more cerebral, though he’s not the first to have come up with the idea of casting children in the roles of the weird sisters.

There have been many different interpretations of the witches, from the old hags described by Shakespeare to beautiful young women and Lady Macbeth lookalikes. For some examples take a look at Warwick University’s Reperforming Performance website’s section on Staging the Witches. Boyd’s production will provide students of the future with much to discuss in their work on the history of Shakespeare on stage.

And see my video blog on Fuseli’s painting of the Three Witches, owned by the Royal Shakespeare Company made for the 2010 Shakespeare Centre exhibition on Shakespeare’s Women.

4 Responses to When shall we three meet again?