Macbeth: what happens next? 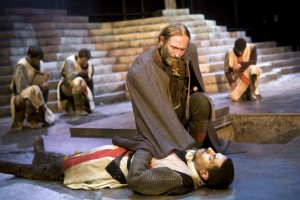 Jonny Phillips as Siward and soldiers in Dunsinane. Photo by Simon Annand, from www.rsc.org.uk

So what does happen after the end of Macbeth? For Shakespeare, needing a politically-acceptable conclusion, the answer was straightforward, Malcolm filling the vacuum left by the death of the tyrant and his queen.  David Greig, in his new play Dunsinane, has a different set of ideas about war. Here, Lady Macbeth (Gruach) and her son are still alive and the invading English army is checked by warring Scottish clans. It isn’t long before the invaders themselves are under attack. It’s a parable of all those wars in which Western forces have intervened in another country, and the uncomfortable truth that in real life the curtain doesn’t come down just because one side declares the war to be over.

Greig joins a long tradition of artists using, or appropriating, Shakespeare for their own purpose in music, art and literature. Famous examples of work which has become renowned in its own right include Millais’ painting of Ophelia, Prokofiev’s ballet music for Romeo and Juliet and Verdi’s opera Falstaff.

The great Shakespeare scholar David Bevington, in a recent lecture about Hamlet in Stratford, commented on how often artists have represented scenes which Shakespeare only described, such as the death of Ophelia. One of my favourite spinoffs from Shakespeare’s play is Tom Stoppard’s Rosencrantz and Guildenstern are Dead.  Art is never exactly about what it seems on the surface, and this play starts off as a hilarious inside-out version of Hamlet, “where every exit [is] an entrance somewhere else”, but is saved from being just a clever confection by the many references to the differences between life and art and the inevitability of death.

Where Stoppard’s play is confined within the action of Hamlet, Greig’s play quickly moves away from the familiar like the famous scene at Birnam Wood. This isn’t to say there aren’t moments where we are reminded of Shakespeare. The opening figure of the young and inexperienced soldier boy speaks simply and openly to us as does the boy in Henry V, who becomes a victim of battle.

While the play includes the frustrations of the good leader, Siward, trying to make peace, the heart of the play is in the story of the ordinary soldiers. Greig makes them inarticulate figures, swearing and endlessly complaining of the cold and wet. There are moments when a few soldiers, dressed in their soiled crosses of St George, stand to address the audience directly. The stillness of these moments reminded me of a scene in the production of T S Eliot’s Murder in the Cathedral, performed by the RSC in the same Swan Theatre in 1993. The four drunken knights who have murdered the saintly Becket turn into polished twentieth-century politicians addressing the audience with elegant speeches about political expediency and the regrettable need for violence in the search for social justice.

Like Shakespeare and T S Eliot, David Greig too has made his point about politicians in a play which is likely to have resonance far into the future.

6 Responses to Macbeth: what happens next?