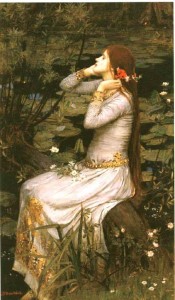 Painting of Ophelia by John Waterhouse

Over the last couple of days Shakespeare’s inspiration for the death of Ophelia in Hamlet has provoked a surprising amount of media coverage. University of Oxford lecturer Dr Steven Gunn has been researching records of inquests at the National Archives, and has found a record of the drowning of a girl called Jane Shaxspere. Because they share similar surnames it is speculated that Jane was probably a relative of William’s. The record has added appeal because the girl was picking summer flowers when she fell into the pond where she died.

It’s not quite so clear-cut. The event took place in 1569 when Shakespeare was only five, and the girl who died two and a half. It happened twenty miles from Stratford, and there isn’t any evidence that she was related to the Stratford Shakespeares (it was quite a common name at the time).

By coincidence I wrote a post for this blog on 31 May which looked at another possible source for the death of Ophelia, the case of Katherine Hamlet. I hadn’t realised until I recently revisited the work of Edgar Fripp that this case is so well documented, and contemporary with Shakespeare. Fripp includes a report of the detailed questions asked by the coroner in another possible suicide, which he assumes also to have been asked in the Katherine Hamlet case. They are remarkably reminiscent of the Gravediggers’ discussions in Hamlet.

One of the comments to my blog now suggests another candidate for Ophelia, Margaret Clopton. The same age as Shakespeare, she lived at Clopton House, a grand residence on the outskirts of Stratford. The story is that she drowned in a spring or well at the house, but there’s no documentary evidence to support it. Deaths by drowning seem to have been fairly common.

Many of the printed sources used by Shakespeare have been positively identified, but little is known about where, if anywhere, he found the details which litter his plays. Ultimately the sources are irrelevant to the appreciation of Shakespeare’s work, but it’s hard to ignore these snippets that Shakespeare, like a magpie, could have picked up wherever he found them.

We’ll never know for certain, but in the contest for the likely source for the death of Ophelia, Katherine Hamlet still gets my vote!