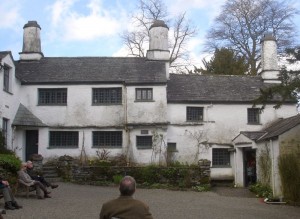 Townend in the village of Troutbeck, the home of the Browne family

While on holiday in the English Lake District earlier this year I visited Townend, an old farmhouse in the village of Troutbeck, now in the care of the National Trust.

It’s a rare survivor, a house lived in by the same family from the sixteenth until the mid-twentieth century, and is full of character. The thing that really intrigued me about the house, though, was the collection of books which are still contained there. One of the nineteenth-century owners made bookshelves in the house to hold the books, and a room called the Library is on limited view. It’s surprising enough that a farmhouse should contain a Library at all, but this collection is truly remarkable, and  “perhaps the oldest surviving yeoman’s library in England”.

Not only do the books still exist, but the family were such careful keepers of records that many of the documents listing their purchases are also still in existence. The chief book collectors lived at the end of the 1600s and the first half of the 1700s. From inventories we know that there were at least 400 books in the house in 1750, and we also know what they were.

The Browne family were living in Troutbeck in 1525, and the central part of the current house probably dates back to the early 1600s. It’s likely that a few books were being bought by that first Browne who died in 1559. The earliest book in the collection dates back to 1555. The books cover quite a range of subjects: practical handbooks on agriculture and household management, law, and entertainment in the form of chapbooks, ballads and plays. Among the books acquired in the early 1700s are copies of Rowe’s edition of Shakespeare and several plays dated 1734. Gervase Marham’s 1648 guide to animal husbandry, brewing, cooking and beekeeping is among them. There is evidence in the records that books were borrowed by family and friends.

The National Trust’s Libraries Curator, Mark Purcell, sent me a copy of his article,  Books and Readers in Eighteenth-Century Westmorland: the Brownes of Townend, in which he comments that the size and extent of this Library “ is all a far cry from the traditional view of the Lakeland as a district both financially and culturally impoverished, where books were few and far between”.

Troutbeck is still remote. It’s several miles from the nearest town, in a deep and isolated valley which would have been difficult to reach in the sixteenth century. Now fully catalogued, the extent of this Library has taken experts by surprise, and has implications for students of Shakespeare and the cultural history of the period. There are those who question the literacy of Shakespeare’s family and other townsfolk, but Stratford had easy links to major towns, and educational opportunities at the well-regarded grammar school. If the inhabitants of Troutbeck were able to read and enjoy books it stands to reason that the people of Stratford, Wilmcote and Shottery could have done the same.

One Response to Reading in Shakespeare’s England