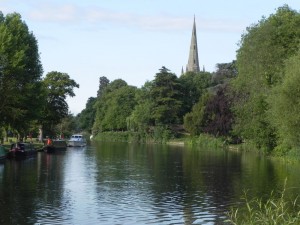 The River Avon has always been of central importance to the town of Stratford and the area surrounding it. In Shakespeare’s day, it was an important artery for trade and a source of power (the mill is mentioned in the Domesday Book), but the river also marked an imprecise boundary between two different kinds of countryside. To the north was the well-wooded Forest of Arden, already in decline but still different from the open rolling farmland of the Feldon land to the south. Each type of land would have produced different agricultural goods for exchange in Stratford’s markets. In Shakespeare’s play, King Lear grants his eldest daughters a third of his kingdom:

Of all these bounds, even from this line to this,

With plenteous rivers and wide-skirted meads,

The river would also have been a magnet for children to swim and play in, and to observe the wildlife. You don’t have to look far in Shakespeare’s plays for evidence of these activities.

Nowadays the river is used entirely for recreation, but even this has its commercial side: you can take a boat trip, hire a rowing boat, or even have dinner on a converted narrow boat. The river links two major sites of Shakespeare importance, the Royal Shakespeare Theatres and Holy Trinity Church.

Among all this the river and its banks are full of life. People walk their dogs, ride bikes, jog, fish, play football, or just stroll. Within a hundred yards of the water there are restaurants, hotels, pubs, car parks, and ice cream vans. In only a little over a mile of its length, four bridges cross the Avon, two carrying traffic and two footbridges. 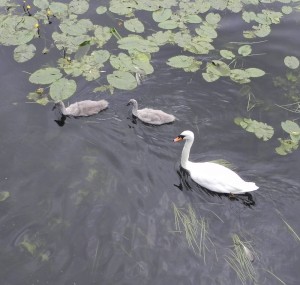 Yet somehow the river still has a rural feel, helped by the green expanse of the recreation ground opposite the theatres. Walk away from the town in either direction for a few minutes and you find yourself in the countryside. Here the river is calmer, and wildlife has the chance to find quiet pockets to live and breed. It’s surprising how much flourishes here so close to such a busy area.

The cygnets in the photograph are part of a family of swans living near Lucy’s Mill, as are some coot chicks, and there’s another family of swans further up river. Nearer to the centre of town are a few moorhen chicks living cheek by jowl with large numbers of other birds including Canada geese.

In or near to the river I’ve seen quite a range of birds, insects and mammals, most of which are listed at the end of the post. I already mentioned Shakespeare’s interest in wildlife, and Bottom’s song in A Midsummer Night’s Dream includes just a few of the common birds still to be seen here, complete with country names:

The throstle (2) with his note so true,

The wren with little quill.

The finch, the sparrow and the lark,

Whose note full many a man doth mark,

And dares not answer “Nay”.

The Avon’s a fragile environment, but an important one, both for the wellbeing of today’s inhabitants and for the heritage of Shakespeare’s town.