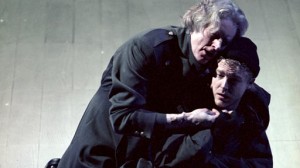 It’s Father’s Day in the UK today, and the prime minister, David Cameron, is taking the opportunity to have a go at fathers who fail to take financial or emotional responsibility for their families.

There are children growing up …who will never know the love of a father. And we know, too, the consequences of that. When fathers aren’t there for their kids, those children are more likely to live in poverty, fail at school, end up in prison and be unemployed later in life.

Shakespeare’s fathers wouldn’t come off too well if judged by David Cameron’s standards. In The Winter’s Tale Leontes refuses to take any responsibility for his new-born baby, abandoning it to a distant place “where chance may nurse or end it”, and King Lear banishes his favourite daughter when she stands up to him. The ghost of Hamlet’s father gives his son the awful responsibility of revenging his murder.

Many of Shakespeare’s plays are both political dramas about the ruling classes and stories about family breakdown caused by domineering mothers, stroppy adolescents or the heavy hand of absent fathers. Shakespeare mined his sources for stories about families, often disfunctional ones and one of the reasons for Shakespeare’s enduring popularity is that audiences have always been able to recognise the tensions of their own family lives regardless of social class.

Where, then, do we find ideal fathers in Shakespeare’s plays? My top dad is actually not a real dad at all, but a surrogate father. Twenty years before the action of Cymbeline begins Belarius, stole the king’s two sons in revenge for his own banishment, and raises them as his own children. He’s a romantic, moralising, hermit-like figure, but a responsible father to the two princes.

In his introduction to the Arden edition J M Nosworthy says the boys are “lyrical Arcadian figures uttering gentle unrealities”, but they are more complicated than this suggests. Belarius suggests that nature is more important than nurture in making the boys what they are:

Thou divine Nature; thou thyself thou blazon’st

In these two princely boys; they are as gentle

As zephyrs blowing below the violet,

Not wagging his sweet head; and yet, as rough

That by the top doth take the mountain pine

And make him stoop to th’vale. ‘Tis wonder

That an invisible instinct should frame them

Civility not seen from other, valour

That wildly grows in them, but yields a crop

As if it had been sow’d.

There’s a strong element of fairy-tale fantasy in Cymbeline which may account for this romantic view. In David Cameron’s reckoning though, Belarius, as hands-on father, would deserve the credit for how the boys turn out.

One Response to Shakespeare’s fathers: nature or nurture?