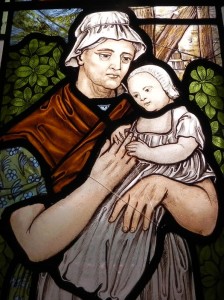 The baby, from the Seven Ages of Man

Glass is the most mysterious of substances, translucent yet intensely colourful, hard but fragile and easily broken. A friend has just celebrated the first firing of her new glass kiln, and over the weekend a group of us crowded into her garden workshop to admire the little squares of fused glass, each one a different pattern and combination of colours.

Coloured glass has been used to make pictures for hundreds of years, and Shakespeare and his plays are among the most popular of secular subjects.

Jaques famous speech from As You Like It on the passage of life into seven different ages, has probably been illustrated more than any other. It begins:

All the world’s a stage,
And all the men and women merely players;
They have their exits and their entrances,
And one man in his time plays many parts,
His acts being seven ages.

I became interested in representations of this speech following an enquiry put to me a few years ago. One of the most striking pieces of decoration in the original 1879 Shakespeare Memorial Theatre, and a miraculous survivor of the 1926 fire, is the series of windows alongside the staircase leading up to what are now the circles in the Swan Theatre. These windows were installed between 1881 and 1887, but the name of the designer and manufacturer is not recorded. Many people visiting for an evening performance don’t even notice them because they are best appreciated on a sunny day.

“The lover, sighing like furnace, with a woeful ballad made to his mistress’ eyebrow”

The enquiry related to the windows of the Seven Ages of Man which are recorded to have been in the Royal Exchange Inn, West Bromwich, around 1850, to which a music hall was added in 1855. During the 1880s a Mr Rainbow was appointed manager.

The windows had long been removed by the time the pub was demolished in 1967 and the enquirer was interested in the idea that these might be the same windows, reused at the Memorial Theatre. The fact that nothing has ever been discovered about the Theatre’s windows fuelled the interest. Charles Flower, who largely paid for the building of the Memorial Theatre, was a brewer who would have had many connections in the brewing trade, and a Mr Rainbow was for many years as the manager of the Theatre. Was it possible that it was the same windows?

Disappointingly for the enquirier, the description of the windows from the Inn aren’t a perfect match for those in the Theatre, and thinking about it, it seems unlikely that Mr Flower would have wanted to use second-hand windows from a public house in his new and prestigious theatre. Nevertheless it serves as a reminder of what a popular subject this speech is, and not just for theatres.

There are many representations of the speech in glass. The best-known is that at the Folger Shakespeare Library,  Washington DC, commissioned for the building in 1932. Other examples are the chapel at Oundle School in Northamptonshire, created  by Hugh Easton in 1950,  Southwark Cathedral, London,  by Christopher Well in 1954, the State Library of New South Wales, Australia, by Arthur Benfield installed in 1940, Fort Lincoln Cemetery, Maryland dating from the 1920s or 1930s and Torbay Methodist Church, Devon made by Peter Tysoe in the 1970s .

My friend presented me with one of the pieces of glass from her first firing. This now sits in my window, a square of rich, glowing blue and red, a beautiful example of this most magical of materials.