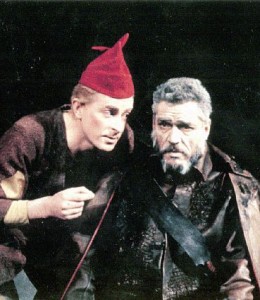 Alec McCowen as the Fool, Paul Scofield as King Lear, RST 1962. Photo from the Shakespeare Centre Library and Archive

In 2004 The Daily Telegraph published a survey in which RSC actors voted for the greatest Shakespeare performance in history. It wasn’t exactly a scientific poll, but the result was clear, and not unexpected.

The winner was Paul Scofield in King Lear. The result undoubtedly depended on the fact that this performance had first been seen on stage between 1962 and 1964, then repeated in a film version released in 1971, and that the director of both stage and screen versions was the legendary Peter Brook.

Paul Scofield became a professional actor young: he was spotted working at the Birmingham Repertory Company by the even younger Peter Brook and they, with Barry Jackson, came to Stratford in 1946. Scofield established himself as a star playing Pericles and Henry V and soon moved on to a series of major roles in Stratford including Hamlet, Bassanio, Macbeth and Mercutio.

A close contemporary of Richard Burton, who shot to fame with his performance as Henry V in 1951 (number 1 in this series), Scofield was a completely different character, and had a very different career. Although he had film successes, notably in A Man for All Seasons (also based on a stage play), he never pursued a major Hollywood career and kept out of the public eye. In later years he added weight to two Shakespeare films playing the King of France in Kenneth Branagh’s Henry V and the Ghost of Hamlet’s father in the Mel Gibson film of Hamlet.

Like Burton, he had a distinctive voice. Just as Burton’s lyrical and heroic delivery was perfect for Henry V’s rousing speeches, Scofield’s gravelly voice found its perfect setting in the harshness of Brook’s King Lear. The Daily Telegraph review of the stage production commented on his “unsentimental, awesome, rasping delivery” and the depiction of a “society only one degree removed from savagery”. The Times commented on his “grating low tones, the powerful air of authority”.

It was quickly recognised that Brook’s production had uncovered new depths in the play, and Scofield’s acting had a universal quality. Milton Shulman wrote “His England is Anywhere and his Lear is Everyman”.

The production’s success, with hundreds of performances over three years including a tour taking in Berlin, Moscow and New York, gave Scofield the chance to refine his performance. Between this tour and making the film of King Lear he played the saintly Thomas More on stage and screen, but there’s no sign of More’s human warmth in his portrayal of Lear.

Maybe the film should be seen as an alternative interpretation of Shakespeare’s play rather than a straightforward version of it. It’s certainly eccentric. Scofield’s performance is often extremely subdued and the film takes every opportunity for close-ups of his craggy features. However the original reviews of the onstage performance seem to indicate that this was still in essence the performance we can see on film. There are lots of clips from it on YouTube, and I’ve chosen the scene where Lear’s two eldest daughters humiliate their father by refusing to accommodate his entourage of attendant knights.

Scofield died in 2008 at the age of 86, leaving behind him many recordings of his screen and radio work. It’s the film of King Lear, though, with its echo of the stage production, that enabled this performance to be voted the greatest in history.