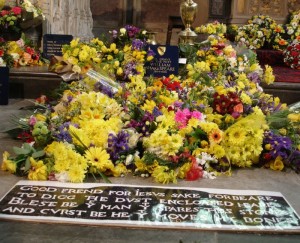 Shakespeare's grave decorated with flowers on his birthday

Why is there such fascination with the idea of exhuming Shakespeare? People who want to do so always claim they will find something exciting out by doing so. The current crop of hopefuls, as recorded by the Stratford Herald, BBC America and Fox News expect to find out what he died of, to examine the rumour that he was murdered (I don’t know where this one came from either), or to confirm that he smoked cannabis.

A hundred years or so ago, would-be grave robbers were after manuscripts, and anti-Stratfordians hoped to find evidence that someone else was the author. Some people have also wanted to examine his leg bones in the hope of establishing whether he really had a limp (no I’m not making this up).

Back in the nineteenth century the interest in phrenology (one of the Victorians’ wackier ideas) led some to hope they would find out about his mind by looking at the shape of his skull, or enable a reconstruction of his face.

Then there are the rumours that the grave has already been robbed. There were rumours in the eighteenth and nineteenth centuries that the grave had been unintentionally broken into, but since one report says that there was nothing but dust, and another says that a skull and other bones were visible, there’s no way of knowing how true any of these are. In 1879 a story was published seeming to claim that the skull had been stolen in the 1790s.  This created a lot of excitement in spite of the fact that the author is anonymous, reporting the story of another anonymous man (now safely dead), of the escapades of a Frank Chambers whose existence could not be confirmed. Together with the fact that the story was published in The Argosy, a periodical containing charming pictures, poetry and fictional stories, it’s no wonder that the item and its rather limp follow-up published five years later has been categorised in the Shakespeare Centre and Library as “Fiction inspired by Shakespeare”.

The current attempt to open the grave comes from the same scientists who tried to prove in 2000 that Shakespeare smoked drugs by examining some clay pipes in the Shakespeare Birthplace Trust’s collections. In spite of their efforts to convince otherwise, none of them can be linked with Shakespeare and I do have to wonder about the quality of their research when they claim that the phrase “noted weed” which appears in one of the sonnets may be a reference to cannabis. Two minutes searching the Oxford English Dictionary finds that the earliest use of the word “weed” to mean cannabis can be dated to 1929. In Shakespeare’s day, and for centuries afterwards, the word meant either a plant or clothing (as in “widow’s weeds”). This is clearly the meaning in this phrase.

None of the people who have wanted to dig Shakespeare up seems to me to be really interested in adding to our understanding of the man or his work, but for over two hundred years just suggesting the grave should be opened has been a good way to get a headline.

The grave famously contains a curse against anyone opening it, and for me it says it all.

The curse on Shakespeare's gravestone