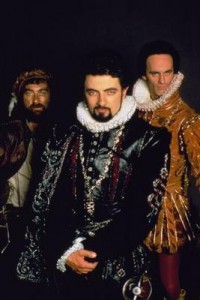 My all-time favourite TV comedies are the 1980s Blackadder series, best of all the second in which the unpleasant and incompetent Edmund morphed into the clever but surrounded-by-idiots Edmund, dazzlingly glamorous in ruff and thigh-length boots, set in the Elizabethan golden age. It wasn’t just Rowan Atkinson either. With Miranda Richardson as the dangerously nutty Queenie, Tim McInnerny as hopeless friend Lord Percy, Stephen Fry as slippery Lord Melchett and Tony Robinson really getting into his stride as the unfortunate Baldrick who always has a “cunning plan” to get out of every scrape – or not.

The comedian Ben Elton was brought in to co-write this series with Richard Curtis, and the scripts are spot on.  According to Tony Robinson in his Desert Island Discs choice the rehearsals were agony, but you would never know.

From the Shakespeare-lovers point of view the funniest episode is the one called Bells. That’s the one featuring a girl who runs away from home and disguises herself as a boy, gets a job with Blackadder and then falls in love with him. You know the sort of thing. The girl’s called Bob, and the romance, of course, doesn’t go smoothly.  Then there’s the visit to the wise woman who bears a strong resemblance to the witches in Macbeth. The oblique references to Shakespeare’s work litter this episode, but what isn’t in the programme is Shakespeare himself.

Ten years after the end of the fourth series of Blackadder, this was put right by the follow-on, Blackadder: Back and Forth. This involved a modern Blackadder travelling in time to various different eras. In one of them he encounters William Shakespeare in the shape of Colin Firth. Can this get any better? Take a look at the clip.

5 Responses to Blackadder and Shakespeare