Shakespeare and honour in All’s Well That Ends Well 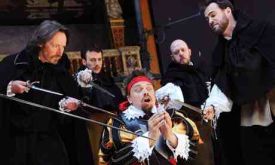 The gulling of Parolles, from the Globe's 2011 production

All’s Well That Ends Well  has recently been described as “one of Shakespeare’s least loved and least performed comedies” (Daily Telegraph) but with current productions at both the Globe Theatre in London and in New York’s Central Park as part of the Shakespeare in the Park season perhaps this complex play is having a bit of a revival.

Attention inevitably focuses on the romantic story which drives the plot, in which Helena eventually successfully wins Bertram, the man she loves. One of the main themes of the play is honour and its relation to virtue. According to Bertram, his ring is

an honour ‘longing to our house,

Bequeathed down from many ancestors

Which were the greatest obloquy I’th’world

In me to lose.

At the same time, the nobly-born Bertram lacks virtue. Helena has this virtue, but is it enough to make her an equal to Bertram?

The play is, though, far more than just a romance. The subplot involving Bertram’s friend Parolles is entirely invented by Shakespeare, so we can assume he chose it with some care.  That “most courteous feather”, a braggart  and coward, Parolles can be seen as  either a figure of warm comedy or a disreputable, obnoxious corrupter of youth.

What is Parolles doing in this play? He has some involvement in the romantic plot, but he is there mostly to open up the discussion of military honour. Parolles and Bertram leave France to fight in wars in Italy. The French soldiers lose their drum, and Shakespeare constructs a story by which Parolles lets down not just himself but all his friends.

In any discussion of the play, including production reviews, this is always passed over almost without comment. Yet it takes up a significant amount of the second half of the play and the exposing of Parolles is essential to the ongoing education of Bertram.

What does the drum stand for? Drums are the main musical instrument used in modern military display, but historically they would have been a symbol and rallying point as we now rally round a flag and national anthem. When the French drum is taken, it’s far more than a drum. 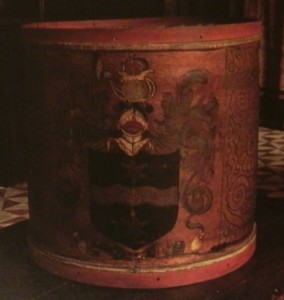 A drum that exemplifies this symbolic importance is Drake’s Drum. Emblazoned with Sir Francis Drake’s coat of arms, it is supposed to have been on board Drake’s ship when he circumnavigated the globe between 1577 and 1580 (the first Englishman to do so), and to have been with him on the voyage to the Caribbean in 1595-6, during which he died. Following his death the drum was brought back to Drake’s house, Buckland Abbey in Devon, where it is still on display.

Drake was the ultimate Elizabethan self-made man. Like Shakespeare he came from fairly humble origins, his family being yeoman farmers. His coat of arms bears the motto “Sic parvis magna” or “great achievements from small beginnings”, reminiscent of Shakespeare’s own motto “not without right”. 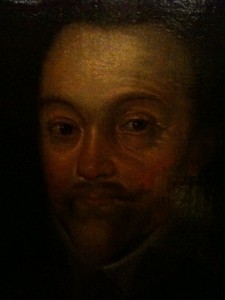 Sir Francis Drake, aged around 50. This portrait is at Buckland Abbey

Drake became one of the greatest adventurers of his time. The Spanish rated him as a pirate and he certainly didn’t play by any rules. He brought great wealth back to England, in exchange for which he was rewarded with money and a knighthood. A charismatic figure, his exploits made him a figure of myth, and the drum became a powerful symbol. Did Shakespeare know about the story of the drum?

The first half of the play repeatedly harks back to a past in which honour and virtue went hand in hand. It seems to ask the question of how a younger generation can make their own mark while at the same time retaining what was best about the past. Helena links knowledge of the past, her father’s medical skills, with her own ambition for the future, and Bertram is a young man seduced by the glamour of the new who eventually learns to respect and honour the past.

It’s a play rich in myth, legend and tradition. Would the mention of the drum raise memories of Drake, the man who proved that achievement and reputation had nothing to do with birth?