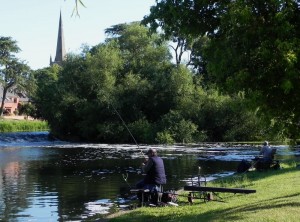 The River Avon is the centre of attention for visitors to Stratford this weekend, with the Stratford River Festival  entertaining people with lots of  events on and by the water. It probably won’t be the best weekend though for those wanting to pursue that most traditional of river pursuits, fishing.

The earliest reference to fishing in the town is in the Domesday book of 1085 which found that inhabitants of Stratford-upon-Avon sent 1000 eels annually to the Bishop of Worcester by way of payment for the use of the mill to grind their corn. Jeanne Jones, in her book Family Life in Shakespeare’s England, notes that between 1570 and 1630 there was a fisherman and a fishmonger in Stratford.

Angling was also a sport for those with time to spare. Gervase Markham’s book, Country contentments: or, The husbandmans recreations lists “the wholesome experiences in which any many ought to recreate himself, after the toile of more serious business. As namely, hunting, hawking, coursing with grey-hounds…[and] the whole art of angling.  A popular book, it went through many editions in the seventeenth century. The Shakespeare Centre Library and Archive holds a copy of the 5th edition from 1633. 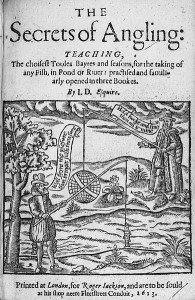 Title page of the poem The Secrets of Angling

John Dennys’s poem The secrets of angling is a much rarer book, published posthumously in 1613, its lovely title page showing that angling was a leisure pursuit.  Among the many books left by the curate of Bishopton when he died in 1607 was a book on angling.

It’s fair to assume that the children of the town fished in the river, the young Shakespeare among them. Shakespeare’s references to fishing are frequent and accurate. Most of them are listed here.

In Much Ado About Nothing,  Beatrice and Benedick are both described as fish being baited when their friends deceive them into thinking they are in love with each other:

The pleasant’st angling is to see the fish

Cut with her golden oars the silver stream,

And greedily devour the treacherous bait;

So angle we for Beatrice.

Cleopatra likens the act of fishing to catching Antony:

Give me mine angle, we’ll to th’river; there,

My music playing far off, I will betray

Their slimy jaws; and as I draw them up,

I’ll think them every one and Antony,

In The Two Noble Kinsmen the Wooer, while fishing, hidden by reeds, overhears a young girl singing.

As I late was angling

In the great lake that lies behind the palace,

From the far shore, thick set with reeds and sedges,

As patiently I was attending sport,

I heard a voice…I then left my angle

To his own skill, came near, but yet perceiv’d not

Who made the sound, the rushes and the reeds

Had so encompass’d it. I laid me down

And list’ned to the works she sung, for then

Through a small glade cut by the fishermen,

I saw it was your daughter.

The authorship of The Two Noble Kinsmen was shared between Shakespeare and Fletcher, and there seem to me to be echoes of Gertrude’s speech about the death of Ophelia in these lines. What’s clear from all these quotes is that Shakespeare knew and appreciated the pleasures of fishing, and that he’s likely to have learnt this during his childhood on the River Avon.