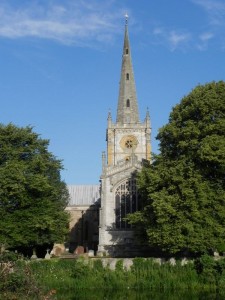 Holy Trinity Church from across the Avon

Anyone visiting Stratford interested in places associated with Shakespeare will be aware that the parish church where he worshipped is a good 15 minutes walk from Shakespeare’s Birthplace. Why is Stratford’s church on the outskirts of the town, and on the banks of the river, rather than in the town centre?

Stratford’s history goes back to at least the seventh century, when there was a monastic settlement here. It’s thought that the church stands on the same ground as this original settlement. From the churchyard, near the river, you can see why this was a good site, as it stands several metres above the river. When the river floods, as it still does, the recreation ground opposite, and much of the town near to the bridge, are submerged.

In medieval times the Bishop of Worcester saw the town’s commercial possibilities and secured a grant for weekly markets and fairs as well as planning the town’s development on a grid pattern which still exists today. This new commercial centre expanded towards the river crossing or ford, which was eventually made passable in all weathers by the construction of the Clopton Bridge. The street named Old Town, which leads down to the Church, already had that name in the 1300s.

The church itself and its history are well documented. Harvey Bloom, the then vicar, published Shakespeare’s Church in 1902 and in 2010 a new beautifully illustrated book with the same title was published.

Holy Trinity Church is the building which has the strongest links with Shakespeare. He was baptised, worshipped and buried here, and although both the interior and exterior have changed, it’s still recognizable.

Shakespeare’s grave is within the chancel, only yards from the river itself. The graveyard surrounds the church, but none of them are from Shakespeare’s time due to the custom of re-using graves. Shakespeare’s knowledge of this practice is evident in the scene in which Hamlet meets two gravediggers who are digging up an old grave (Yorick’s) in order to re-use it for the recently drowned Ophelia.

Hamlet: How long will a man lie i’th’earth ere he rot? ….

Hamlet: Why he more than another?

Gravedigger: Why sir, his hide is so tann’d with his trade that ‘a will keep out water a great while, and your water is a sore decayer of your whoreson dead body.

In A Midsummer Night’s Dream Shakespeare taps into the popular fear of graveyards at night:

Now it is the time of night

That the graves, all gaping wide,

Every one lets forth his sprite,

In the church-way paths to glide

And in The Tempest Prospero’s magical powers include raising the dead:

Graves at my command 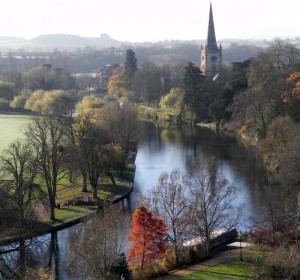 The accident of history which has positioned Shakespeare’s church close to farmland and the Avon itself ensures that it, like the man himself, will always be associated with the River Avon and the countryside of this part of England.