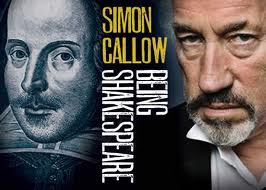 This week’s Start the Week on BBC Radio 4, broadcast on 4 July, asked how much we need to know about writers’ lives in order to fully appreciate their works. Contributors included a specialist on the medieval poet Dante and a poet, as well as the academic Jonathan Bate. Much of the debate was about Shakespeare, about whom Andrew Marr pointed out we know more than we think we do. The many documents relating to his life, sadly don’t take us to what they called his “interior life”, and Jonathan Bate talked about how he has addressed this problem in the writing of the current West End  one-man show for actor Simon Callow, Being Shakespeare.

All agreed with Bate that the “plays are not confessions or diaries or autobiographies, for the ways in which the plays reveal the interior life are indirect”, and are “a witness to the interior life”. The poet used a parallel example of writing poems about mortality while never specifically mentioning her own illness.

In sonnet 48 we get a sense, perhaps, of Shakespeare deliberately not revealing too much of himself:

How careful was I, when I took my way,

Each trifle under truest bars to thrust,

From hands of falsehood, in sure wards of trust.

The discussion led on to scenes where Shakespeare seems to be directly recalling scenes from his own life. The Latin lesson in The Merry Wives of Windsor is a throwback, perhaps even a joke, about Shakespeare’s own schooldays, but Bate also considers the scenes of recruitment for the militia in Henry IV Part 2 to indicate that Shakespeare was on the muster roll of men who could be called into military service, and that the many references to the army could imply that he may have been a soldier during the so-called “lost years” where there is no record of where he might have been.

Historian Mairi Macdonald, in a comment, doesn’t agree: “I’m deeply unconvinced by this, given that there were so many soldiers and ex-soldiers around during the late 16th century and, as with so many other aspects of his work, it is clear that Shakespeare loved acquiring and absorbing information”.

I also was surprised by the discussion, as I’ve never heard this idea taken very seriously. In Shakespeare’s younger years he would have heard older men discussing battles. The atmosphere of the scenes in Henry IV Part 2 is overwhelmingly nostalgic, not active. There is a legend that Shakespeare’s own father, or perhaps his father’s father, had done military service.

On my recent visit to the West Country I kept thinking how much the landscape, the sea itself, the waves and the tides would have affected a boy from the gentle landscape of the midlands. Yes he would have heard travellers’ tales, and there were books like The Mariner’s Mirrour from 1588, and Hakluyt’s The Principall Naviagations, Voiages and Discoveries of the English Nation, from 1589.  But Shakespeare does write with tremendous intensity about the sea.

Stormy waves crashing on cliffs are described by Horatio to persuade Hamlet that the ghost might draw him to his death:

What if it tempt you toward the flood, my lord,

Or to the dreadful summit of the cliff

That beetles o’er his base into the sea …

Without more motive, into every brain

That looks so many fathoms to the sea

And hears it roar beneath

On my return I took a look at Alexander Falconer’s book Shakespeare and the Sea. Falconer spent his life at sea, and suggests that Shakespeare “brought with him knowledge of the sea and of the navy [which] can be seen in his earliest plays”, and that Shakespeare spent much of those lost years on board ship.

The manning and running of royal ships;…the duties of officers and seamen;… strategy and the principles of sea warfare, gunnery, grappling and boarding are all known to him; so, too, are the main types of ship, their build, rigging, masts, sails, anchors and cables. The sea itself in its varied working, tides, waves, currents, storms and calms, never goes out of his work.

This may be partly wishful thinking, as like Shakespeare I’m “inland bred” and always feel drawn to the wildness and grandeur of the sea. We’ll probably never know, but I’d far rather hear the sea ebbing and flowing in the rhythm of the verse than the martial pipe and drum.