A Midsummer Night’s Dream on stage 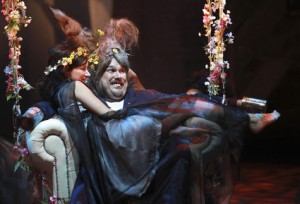 Pippa Nixon as Titania and Marc Wootton as Bottom in the RSC's 2011 production.

When diarist Samuel Pepys went to see A Midsummer Night’s Dream in 1662 he was not impressed. “I had never seen before nor shall ever again, for it is the most insipid ridiculous play that ever I saw in my life”. It’s possibly the worst review that the play has ever had as it’s been a perennial favourite through the centuries and remains a real crowd-pleaser.

The story of Bottom, his fellow-workmen and their play of Pyramus and Thisbe has also had a separate existence, being lifted and performed on its own from as early as 1661 as The Merry Conceited Humours of Bottom the Weaver. In the eighteenth century several operatic versions of the play appeared and it wasn’t until well into the nineteenth century that it was performed as written by Shakespeare.

One of the reasons for its enduring popularity is the scope it offers for elaborate scenery, magical effects, music and dance. It’s also a beautifully constructed play containing some of Shakespeare’s most memorable poetry. There’s no direct source for the play but Shakespeare drew heavily on the stories and legends which he would have heard as a child and which many country people still believed in. He also created compelling characters and a story in which two young men are in love with the same girl, a recipe for confusion and slapstick humour. Nowadays the play can be set in virtually any time or place, and productions are always interesting because of the artistic freedom this allows.

I’ve been lucky enough to see many productions of this great play, mostly in Stratford by the RSC.  The latest production has been praised for its inventiveness, its physicality and its humour. Casting a comic rather than a straight actor ensures that Bottom’s scenes are hilarious, and the slapstick is beautifully choreographed. It seems to me this element may owe something to the Indian production which had its first performances outside India in 2006 as part of the Complete Works Festival.

Directed by Englishman Tim Supple the production, firmly based in the Indian sub-continent, was universally admired. Michael Billington described it as “the most life-enhancing production of Shakespeare’s play since Peter Brook’s”, and the experience “an act of ritual communion”. It was performed in seven languages, so nobody was able to understand more than part of the heavily-cut text. Professor Christopher Conway suggested that “Freed from English, we discover a new Shakespeare, one that is constructed out of visual metaphor and action. And surprise, it is wonderful and hypnotic, it is entertaining and moving.” There’s a fantastic trailer which catches the spirit of the production here.

My favourite production of the play, though, was the 1989 John Caird production. Quirkily English through and through, it featured grumpy teenage fairies in tutus and Doc 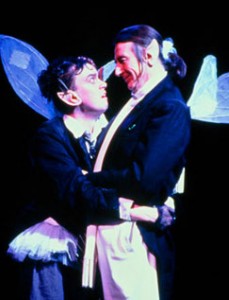 Richard McCabe as Puck and John Carlisle as Oberon, RST 1989

Martens and a stiff upper-lipped Demetrius wearing smart pyjamas done up to the neck. Puck and Oberon were gloriously eccentric in both dress and behaviour, the forest was a rubbish dump containing iron bedsteads and old pianos. Beautifully acted, it was also hilariously funny and Ilona Sekacz’s jazzed up version of Mendelssohn’s music hit exactly the right tone.

The most influential production of any Shakespeare play in the second half of the twentieth century was Peter Brook’s A Midsummer Night’s Dream in 1970. It was seen around the world, including the USA and Japan. Brook uncovered the psychological aspects of the play, the sexuality and darkness which conventional productions did not explore. Set in a white box – a gymnasium? –a circus? with costumes that some thought were Chinese, and actors doubling the roles of Theseus/Oberon, Hippolyta/Titania and Philostrate/Puck, it looked and sounded like no other production. This Bardfilm blog includes the few clips that exist of the production, and there’s an online exhibition focusing on the production as part of the Touchstone cooperative Shakespeare project hosted by the University of Birmingham.