After the riots: Shakespeare’s tragic fathers and sons 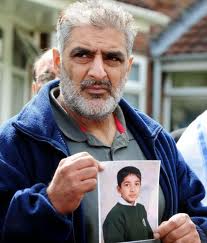 Over the past few days we’ve witnessed the inspirational dignity and grace of Tariq Jahan, the father of one of the young men killed during the riots in Winson Green, Birmingham.  For any of you who haven’t seen it, you’ll find one of Mr Jahan’s statements in which he spoke about losing his son here.

This week has also been the anniversary of the burial of Shakespeare’s only son, Hamnet, who died aged 11 in 1596. Shakespeare didn’t write directly about his loss, but Ben Jonson, whose son died aged only seven, did. Jonson usually gives the impression of being a tough character, but in this tender poem he shows his human side.

Farewell, thou child of my right hand, and joy;
My sinne was too much hope of thee, lov’d boy;
Seven yeeres tho’ wert lent to me, and I thee pay,
Exacted by thy fate, on the just day……
Rest in soft peace, and, ask’d, say here doth lye
Ben. Johnson his best piece of poetrie.
For whose sake, hence-forth, all his vowes be such,
As what he loves may never like too much.

Discussion about the riots that have shaken our cities over the last week has now shifted from simply blaming the mindless rioters to considering the responsibilities of society as a whole, particularly the behaviour of those in authority. 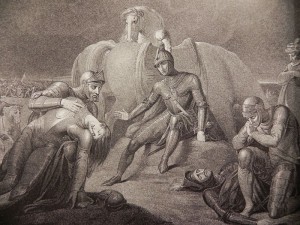 Josiah Boydell's engraving of the battle of Towton showing the King watching the fathers and sons, 1794

In Henry VI Part 3 Shakespeare dramatises the battle of Towton, the bloodiest battle of the civil wars, writing simultaneously of national events in which leaders provoke violence and of the effects on ordinary people. There is a scene during the battle in which a son who has killed his father and a father who has killed his son appear.  The personal tragedies are connected with the larger issue of the ruling of the whole country. The father exclaims:

The scene is being watched by the King who has just spoken of his desire for the simple life of a shepherd. He sympathises with the ordinary men:

Whilst lions war and battle for their dens,
Poor harmless lambs abide their enmity.
Weep, wretched man; I’ll aid thee tear for tear;
And let our hearts and eyes, like civil war,
Be blind with tears, and break o’ercharg’d with grief.

But the audience knows that it’s his weakness and lack of leadership that has led to the bloody battle.

This scene was particularly effective in Michael Boyd’s production for the RSC of the Henry VI trilogy which were first performed at the Swan Theatre in 2000-2001. By clever doubling both fathers and both sons were played by Keith Bartlett and Sam Troughton. They had already been seen as Lord Talbot and his son John in Henry VI Part 1, where John is killed and lamented by his father, and the pair represented all the fathers and sons caught up in the conflicts of civil war.

The father in Shakespeare’s play speaks for any parent in the awful position of having to grieve over a dead child.

These arms of mine shall be thy winding sheet;
My heart, sweet boy, shall be thy sepulchre,
For from my heart thine image ne’er shall go.

2 Responses to After the riots: Shakespeare’s tragic fathers and sons