Asian Shakespeare brought “to the far West” in Edinburgh

It’s Festival time again in Edinburgh. The Fringe Festival is already in full swing and on 12 August the official International Festival will begin. The scale is vast: at the Fringe alone 41,689 acts are being performed. This year the Festival focuses on cultural connections 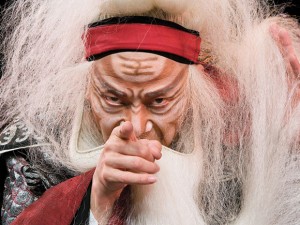 between Asia and Europe under the theme “To the far West”. Productions from China, Korea, Japan, Vietnam and India will show how the relationship between the vibrant storytelling and performance traditions of Asia and the West is developing.

One of the strongest points of connection between East and West is in the works of Shakespeare. The Herald Scotland and Prospect Magazine have published articles describing the Shakespeare productions which are on offer during the Festivals. 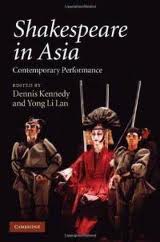 The history of Shakespeare in Asia varies greatly from country to country. His work was hardly known in China before the twentieth century, but Lamb’s Tales from Shakespeare were translated in 1904 making his stories popular decades before any texts were available to read. The first play to be translated was Hamlet, in 1922, and it was 1967 before the first Complete Works was published in Chinese.

For a variety of political reasons Shakespeare and other western authors were ignored until after the end of the Cultural Revolution, but then the country began to open up to European culture. The first Shakespeare Festival in China took place in Beijing and Shanghai in 1986, featuring both productions in traditional English Elizabethan costumes and versions of plays reinterpreted using traditional theatrical forms. Since then Chinese Shakespeare has come of age. The spectacular Chinese production of Romeo and Juliet for this year’s Fringe used the full range of modern performance methods including 3D animations, martial arts, animated scenery and original music. Other productions coming up include a version of King Lear adapted and performed in Mandarin by the Peking Opera actor Wu Hsing-kuo, and a spectacular Shanghai Peking Opera version of Hamlet.

Koreans first encountered Shakespeare as a result of being under Japanese rule. A production of Hamlet was put on by a Japanese company for Japanese colonisers of the country in 1909.  At Edinburgh there will be a version of The Tempest which transports the play to 5th century Korea. Korean theatre is full of magic, music and spectacle, and the production pays respect to these traditions. It’ll also have a political dimension: the director, Tae-Suk Oh, expects the story of warring brothers to be seen as a metaphor for the current division of Korea, holding out the hope for future reconciliation. 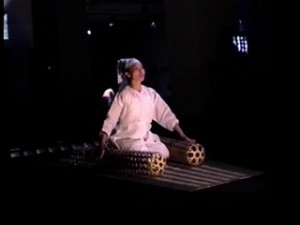 Why are we so interested in Asian Shakespeare performances? Kennedy and Lan suggest they “are collectively distinguished … by the force of their visual, aural, and corporeal strategies…and can be enjoyed, irrespective of how well one understands them”. Even native English speakers can have difficulties with Shakespeare’s language so Asian performers may have much to show us.

Economic forces are at work too. Poonam Trivedi says that “The growth and development of major Asian economies will lead…to a transformation of their geopolitical roles and an assertion of dominance in the cultural arenas too”.

If you’d like to follow up Asian Shakespeare, take a look at the Massachusetts Institute of Technology’s Shakespeare Performance in Asia site. It’s a fantastic collection of film clips, photos, interviews and essays. Even if, like me, you can’t view the video clips, it’s still a great resource.