I couldn’t let the 6 August go by without mentioning that it’s the anniversary of the death of two of the people most important to Shakespeare. 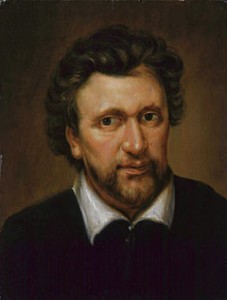 Ben Jonson’s relationship with Shakespeare spanned almost twenty years, beginning, according to Rowe’s account in 1709, when Shakespeare, already an established dramatist, “luckily cast his eye” upon one of Jonson’s first plays and gave him his first break in the theatre. Once Jonson became established, the two had a competitive professional relationship. There’s a wonderful description in Fuller’s Worthies of England, dating from 1662:

Many were the wit-combats betwixt him and Ben Johnson, which two I behold like a Spanish great galleon and an English man-of-war. Master Johnson (like the former) was built far higher in learning; solid, but slow, in his performances. Shake-spear, with the English man-of-war, lesser in bulk but lighter in sailing, could turn with all tides, tack about and take advantage of all winds, by the quickness of his wit and invention.

In private, though, Jonson wrote that he “lov’d the man, and doe honour his memory (on this side Idolatry), as much as any”.

According to a story told to John Ward, vicar of Stratford during the 1660s,  Jonson may have been partly responsible for Shakespeare’s death. “Shakespeare, Drayton, and Ben Jonson had a merry meeting, and it seems drank too hard, for Shakespeare died of a fever there contracted”

Jonson wrote two poems dedicated to Shakespeare in the collected edition of the plays known as the First Folio, published in 1623. In the years following Shakespeare’s death Jonson became a favourite at court, and was effectively the first Poet Laureate. He died in 1637 and was buried in Westminster Abbey.

Engraving imagining Shakespeare reading to his family including Anne

The other anniversary is that of Anne Shakespeare, his wife, who died on 6 August 1623, the same year that Shakespeare’s monument was placed in Holy Trinity Church, Stratford-upon-Avon and the First Folio was published. Anne is buried near her husband, and there is a Latin inscription on her grave. The lines were probably written by John Hall, her son in law, but the sentiments are those of her two daughters. This translation of part of the inscription is in the book Shakespeare’s Church:

Mother, you gave me the breast, you gave me milk and life;
Woe is me, that for so great a gift my return will be but a tomb.
… come quickly, Christ!
That my mother, though shut in the tomb, may rise again and seek the stars

It’s a surprisingly personal epitaph for so public a spot.

The sonnet Anne Hathaway written by Carol Ann Duffy refers to Shakespeare’s bequest to his wife. Unusually it describes Anne and William’s relationship as a loving one and imagines the intimacy and closeness that they shared in that second best bed.

The bed we loved in was a spinning world
of forests, castles, torchlight, clifftops, seas
where we would dive for pearls. My lover’s words
were shooting stars which fell to earth as kisses
on these lips; my body now a softer rhyme
to his, now echo, assonance; his touch
a verb dancing in the centre of a noun.
Some nights, I dreamed he’d written me, the bed
a page beneath his writer’s hands. Romance
and drama played by touch, by scent, by taste.
In the other bed, the best, our guests dozed on,
dribbling their prose. My living laughing love-
I hold him in the casket of my widow’s head
as he held me upon that next best bed.

History has not been kind to the memory of Anne Hathaway, so these poem may help to redress the balance, particularly today.