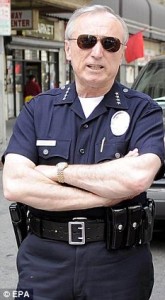 Bill Bratton, the supercop who’s credited with successfully cutting gang crime in New York and Los Angeles, is going to be consulted by the UK prime minister about how to solve the issue of the recent riots in English cities.

Probably without realising it, he made a very Shakespearian statement in an interview reported by the Daily Mail:

In a country that loves gardening, you fully appreciate the idea if you don’t weed a garden, that garden is going to be destroyed – the weeds are going to overrun it.

Similarly for social disorder: if you don’t deal with those minor crimes, they’re going to grow. What also grows is fear, the most destructive element in any civilised society. 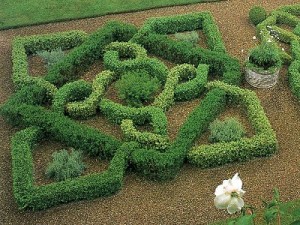 Shakespeare often used the metaphor of the garden when talking about disorder and unrest. In despair at the beginning of the play, Hamlet can’t see any good in the world:

‘Tis an unweeded garden
That grows to seed, things rank and gross in nature
Possess it merely.

In Richard II it’s no surprise that it’s the gardeners, who come to keep the King’s garden orderly, who make the most direct link between their world and what happens in the country as a whole.

Why should we …
Keep law and form and due proportion,
Showing as in a model our firm estate,
When our sea-walled garden, the whole land,
Is full of weeds, her fairest flowers choked up,
Her fruit trees all unpruned, her hedges, ruined,
Her knots disordered, and her wholesome herbs
Swarming with caterpillars. 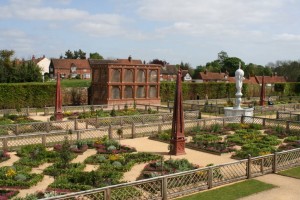 The ideal garden in Shakespeare’s time was a model of order, the knot garden, a formal geometrical construction. The whole point of this style of garden is that it is under control. Vigilant gardeners had to clip the box hedges regularly, scrupulously remove weeds and rake the gravel, or the garden ceased to be a garden at all, and they required so much maintenance that they can only ever have been popular with the wealthy. There are several modern examples of modern knot gardens, including the one at Nash’s House and New Place in Stratford-upon-Avon and the recently restored and controversial gardens at Kenilworth Castle. If you’d like to read more click here for an excellent description of Elizabethan gardening.