I’ll write it straight: The Catalogue of English Literary Manuscripts 1450-1700

This is the second post looking at the subjects raised by the 29 July conference launching the new online Catalogue of English Literary Manuscripts 1450-1700.

The first paper was contributed by the prolific writer and academic Germaine Greer. Ever since the publication of her famous book, The Female Eunuch, sexuality has been the focus of Greer’s work. Her current research is on the poet Ann Finch (1661-1720). Ann’s poems were published during her lifetime and Greer wondered why it was that on her death her husband Heneage, who had encouraged and supported her writing, ordered that all her manuscripts should be destroyed. The fact that only a few  survived brought home how important the author’s manuscripts are to anyone wanting to connect with the author’s thoughts, and set the tone for the rest of the day.

In his opening statement Peter Beal had commented on the increased interest in women’s writing since the original Index was published forty years ago. Over 60 women are represented in the new Catalogue of English Literary Manuscripts as opposed to just one, Aphra Behn, and there is growing interest in women’s education and literacy in the early modern period.

One of the papers was on the letters written in Italian by Queen Elizabeth, and as commented by Peter Beal and Grace Ioppolo in their book Elizabeth I and the Culture of Writing, “Elizabeth I …lived immersed in a culture of writing, one in which she herself participated and which to some degree she helped to create”. Fluent in several languages she encouraged writers, and the spread of education.

A few years ago Greer published another book heavily based on manuscripts, a study of Anne Hathaway, Shakespeare’s Wife. Greer argued that Anne, far from being the neglected and despised wife, left only the infamous “second best bed” in her husband’s will, was a resourceful woman who during her husband’s long absences managed the household in Stratford and may have made substantial financial contributions to the family.

There is no evidence of Anne’s ability to read or write, but it’s always taken for granted that she was illiterate. It’s also frequently said that in spite of evidence to the contrary, Shakespeare did not care about his daughters’ education. But as Greer points out “Anne’s staunchly protestant family would have had her taught to read if only so that she could read her Bible every day” and up to the age of seven both boys and girls would have attended dame schools which taught reading.

Queen Elizabeth was a clear example of women’s capability of learning to the highest standards.  Mulcaster’s influential 1581 book Positions concerning the training up of Children was dedicated to her. He suggests there are “many and great contentments …which those women that have skill and time to read, without hindering their housewifery, do continually receive by reading of some comfortable and wise discourses”. 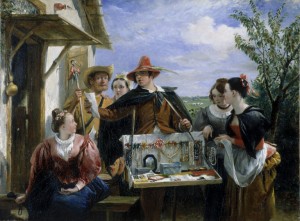 What do we find if we look at the women in Shakespeare’s plays? Many of them can read from the country girls Mopsa and Dorcas in The Winter’s Tale who “love a ballad in print …for then we are sure they are true” to Alice Shortcake who is lent a book of riddles, and the merry wives who receive Falstaff’s letters. The more advanced skill of writing is known by some of Shakespeare’s girls. Phebe, a shepherdess inArden, writes a “very taunting letter”, and Maria in Twelfth Night forges a letter to Malvolio in her mistress’s hand.

None of these women read religious or instructive works, and Nicholas Bownde’s 1595 words might have been written for them:

“in the shops of artificers, and cottages of poor husbandmen … you shall sooner see one of these new ballads, which are made only to keep them occupied… than any of the psalms….   So that in every fair and market almost you shall have one or two singing and selling of ballads”

Poor Ophelia is given a devotional book to read by her father when meeting Hamlet:

Read on this book,
That show of such an exercise may colour
Your loneliness…. With devotion’s visage
And pious action we do sugar o’er
The devil himself.

Hamlet immediately sees through the pretence. Apart from the conventional Ophelia, Shakespeare’s spirited women use their reading and writing skills to outwit the men in their lives.

3 Responses to I’ll write it straight: The Catalogue of English Literary Manuscripts 1450-1700