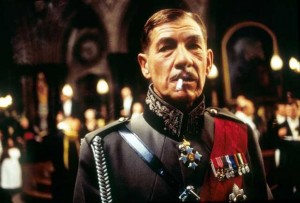 The series of blogs about Shakespeare’s villains posted by the Shakespeare Birthplace Trust at Blogging Shakespeare and Finding Shakespeare, has raised interesting questions about what that word “villain”means. The dictionary definition is a “person guilty or capable of great wickedness, scoundrel”, and this definition of Shakespearean villains is on Yahoo answers:

I don’t believe Shakespeare has any villains per say [sic] but more like misguided characters  …the “bad guys” … are not really bad deep down but broken out by the cruel hand of fate. The villains in Shakespeare’s plays are not horrible people with no sense of humanity…but complex characters, usually more complex and deeper than his protagonists.

Most of this could be summarized by the saying “to understand all is to forgive all”, but the last sentence makes an interesting point. Does Shakespeare find his own villains attractive, and is that why we find ourselves liking them? Would Shakespeare have agreed that nobody is completely bad, but the victim of upbringing or circumstance?

In any list of Shakespeare villains, Iago and Richard III always come at the top. Coleridge coined the phrase “motiveless malignity” for Iago, and Shakespeare obviously enjoyed writing their scenes, giving them the best and most persuasive speeches. Conflict’s an essential part of the entertainments Shakespeare wrote, and his arguments between characters are rarely so neatly divided into good and evil.

Macbeth embodies both sides of the argument within himself. He’s tempted by the ultimate reward, power, egged on by the person who has most influence on him, his wife. Watching this fundamentally good man waver before succumbing to temptation Shakespeare reminds us that we’re all “capable of great wickedness”, and potential villains.

Internal conflicts can be used to comic effect. In The Merchant of Venice, Lancelot Gobbo carries on a debate to decide whether to leave his master, making himself a battleground between conscience and the devil. 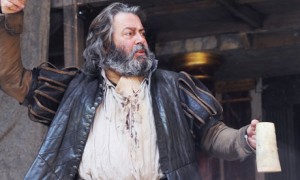 Shakespeare’s villains have usually already decided against “the steep and thorny way to heaven” and have succumbed to the easier path offered by the devil.  But what about those characters, “more complex and deeper”, who aren’t normally thought of as villains? He doesn’t feature on any of the lists of Shakespeare’s villains, but should Falstaff be among them?

Falstaff is a major character in the two parts of Henry IV. In terms of plot, he brings to life the story that the heir to the throne, Prince Henry, got into bad company in his youth. Falstaff is the bad company he got into. Enormously popular, Queen Elizabeth was said to be such a fan that she asked Shakespeare to write a new play as a vehicle for him, and Leonard Digges wrote:

let but Falstaff come,
Hall, Poines, the rest you scarce shall have a roome
All is so pester’d

Can a character so popular also be a villain? Other people call him a villain, and when he promises to reform he says “[if] I do not, I am a villain” (he doesn’t, of course). He’s wonderfully witty, but he’s also a coward, a liar and a thief. Although spoken partly in jest, the prince is Falstaff’s main accuser describing him as “That villainous abominable misleader of youth, Falstaff, that old white-bearded Satan”. The early commentator Maurice Morgann, writing in 1777, excused him by suggesting that he should be judged by the impression he left on the audience rather than his actions. Nowadays it’s more difficult for audiences to forgive Falstaff’s taking of bribes when recruiting soldiers, callously describing them as “food for powder” who will “fill a pit as well as better”.

It’s a difficult job for an actor to encompass all the aspects of the part successfully but Roger Allam made the part his own at the Globe in 2010, combining Falstaff’s zest for life, wit and attractiveness with more than a little sophisticated wily cruelty. In doing so he related the character more closely than you would expect to that undisputed Shakespearean villain, Richard III.

6 Responses to Seeking out Shakespeare’s villains