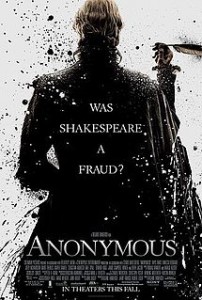 The film poster for Anonymous

I’m part of an online group currently running a lively discussion thread on “Was Shakespeare a fraud?”. This is based on the soon-to-be-released film Anonymous, directed by Roland Emmerlich and written by John Orloff, on the subject of the authorship of Shakespeare’s plays and the political context within which they were written.

Over the years I’ve dipped into quite a few of the books on the subject in response to enquiries. I never succeeded in get any of the enquirers to read a good biography of Shakespeare, but I did get a sense of what were perceived to be the main issues in the debate.

The first is that there’s no single document linking Shakespeare of Stratford with the writing of the plays, and the second is that he didn’t have enough education to have written them. These issues have been examined exhaustively by Dave Kathman and Terry Ross at the modestly named Shakespeare Authorship page, which I heartily recommend you to read if interested in any angle of this discussion.

Kathman analyses the first question by teasing it apart. Those who question the authorship see the man who was born in Stratford, the actor in London, the shareholder of the Globe and the author as at least two different people. But if you look at the documents together, they show they are all the same man.  Doubters claim that evidence from after Shakespeare’s death, like the church monument and the First Folio, which positively link the Stratford man with the writings, is inadmissible.

There’s no reason to be sceptical about Shakespeare’s schooling at the Stratford grammar school. The teachers’ names and their salaries are recorded, and other local boys received a good education, but the attendance records for the school no longer exist. Most documents of the period haven’t survived. For example, of all the documents written by Christopher Marlowe, only a single signature still exists on a document he witnessed for someone else. It’s spelled Christofer Marley. No document links Marlowe with the anonymously published two-part play Tamburlaine. If Shakespeare’s contemporaries were subjected to the same scrutiny as Shakespeare’s their authorship might be doubted too.

A few years ago I went to the London National Gallery’s exhibition Searching for Shakespeare. In one large room they gathered together most of the significant documents relating to the theatre in Shakespeare’s time, and in so doing, pointed out just how rare these are. The Plat [plot] of the Seven Deadly Sins, a scene by scene outline posted backstage to remind actors of the order of scenes, is a rare survivor. There’s just one drawing of the interior of a public theatre, and one sketch giving an impression of how a scene from a Shakespeare play was staged. None of these are official records, all have survived and been found by pure chance.

It’s interesting that people now suggest Shakespeare the author was highly-educated, because several people suggested otherwise during his lifetime, and soon after his death his plays were seen as unlearned. The very first mention of Shakespeare in London, by Robert Greene, a writer and scholar, calls the writer, unmistakeably identified as a “Shake-scene”, an “upstart crow, beautified with our feathers”.  Ben Jonson, a man who himself had no university education, wrote in the First Folio that Shakespeare had “small Latin and less Greek”, and in private described Shakespeare as “wanting art”.

The Shakespeare Birthplace Trust is about to launch a campaign to inform people about the authorship of Shakespeare’s plays. It’s beginning on 1 September, with 60 minutes with Shakespeare and with a webinar on the same day.

Having read the following plot outline which was in a Time Out article earlier this year I’m not sure if anybody expects the film Anonymous to be taken seriously:  ‘Anonymous’ posits the idea that Oxford was not only the author known as William Shakespeare but the illegitimate son of Elizabeth. Moreover, the pair had an incestuous relationship that produced a son, the Earl of Southampton.

The film’s director, Roland Emmerich, clearly doesn’t expect this story to be seen as true: When Shakespeare wrote “Henry V”, he made things up and we’re making things up too.’

John Orloff, like most writers, was more interested in the story than factual accuracy:‘I have done a lot of non-fiction-based movies and there is a point where you have to go with the emotional truth, not the literal truth, because the drama is the primary concern.’

And that last point, at least, is something Shakespeare would have agreed with.

4 Responses to Shakespeare and Anonymous: authorship, truth and drama