Time and the gilded galleon

A visit to the British Museum is always a great reminder of the ingenuity, skill and imagination of the human race over thousands of years and in all parts of the world. In all areas of endeavour there are people who have lived up to Hamlet’s description of mankind:

What a piece of work is a man, how noble in reason, how infinite in faculties, in form and moving how express and admirable, in action how like an angel in apprehension, how like a god 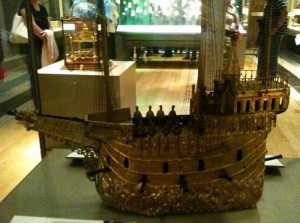 Shakespeare’s time was one of constant new invention. He contributed to the development of the English language, inventing hundreds of new words, and wrote poetry and plays that stretched the imagination of his audience. This inventiveness in the arts was paralleled in the world of science and exploration. Competing countries all across Europe needed new technology to explore by sea, and the ships which crossed the oceans and fought battles by firing cannon were the most sophisticated objects in existence.

One of the most intriguing broadcasts in the 2010 radio series The History of the World in 100 objects was the Mechanical Galleon,  displayed in the Clocks and Watches gallery of the British Museum. This link is to the catalogue entry. 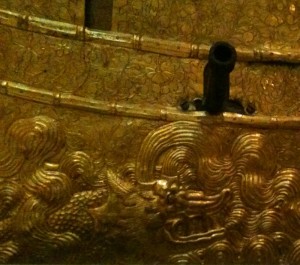 This spectacular model was made in Germany around 1585, in the style of the galleons of the Spanish Armada, standing only 40cm high, not including the masts. The detail includes cannons, sea monsters among the waves, and tiny men on the masts.  It’s thought to have been made for Augustus 1, Elector of Saxony whose inventory includes the following:

“A gilded ship, skilfully made, with a quarter and full hour striking clock, which is to be wound every 24 hours. Above with three masts, in the crows’ nests of which the sailors revolve and strike the quarters and hours with hammers on the bells. Inside, the Holy Roman Emperors sits on the Imperial throne, and in front of him pass the seven electors with heralds, paying homage as they receive their fiefs. Furthermore ten trumpeters and a kettle-drummer alternately announce the banquet. Also a drummer and three guardsmen, and sixteen small cannons, eleven of which may be loaded and fired automatically.”

Following the music and drumming, the ship, powered by clockwork, moved across the table on which it stood and as a finale the front cannon would fire, followed by all the others. More than just an executive toy, the ship is a symbol of the power of the Holy Roman Empire and of Western Europe’s obsession with exploration, travel and conquest. Scientific developments aimed at improving the accuracy of navigational instruments were appropriated for domestic uses in everyday life, and allowed the creation of objects like this that allowed the rich and powerful to show off.  Amazingly, nobody can be absolutely sure this is the one that belonged to Augustus 1. They were so fashionable that several similar ones were made, the must-have trophy for the wealthiest elite.

Clocks and watches are now so commonplace we can probably hardly imagine how rare they once were.  Shakespeare often mentions clocks, which for most people meant church clocks chiming the hours.  According to Falstaff he and Hotspur “fought a long hour by Shrewsbury clock”. The word “clock” is derived from the Latin word for “bell”, and some clocks didn’t even have a dial. 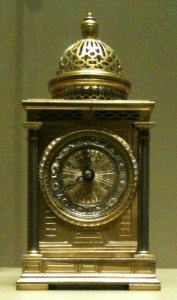 During Shakespeare’s time many of the watch and clock makers in London were immigrants from Germany and the Low Countries. Some of these are represented in the same gallery of the museum. Wealthy households would have had their own clocks: this beautiful table clock was made for the Mardaunt family in Bedfordshire around 1600. Mercutio refers to a clock’s hour hand: “the bawdy hand of the dial is now upon the prick of noon”. 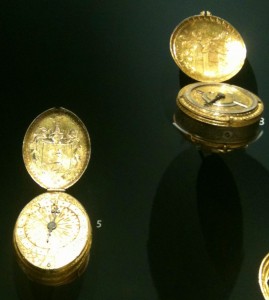 Personal watches and sundials were also carried, though these examples in the Museum were obviously not just for use. Malvolio imagines that when married to Olivia, he will have such a decorative status symbol: “I frown the while, and perchance wind up my watch”.

As Orlando points out in As You Like It “There’s no clock in the forest”, and Rosalind suggests that without a clock “time travels in divers paces with divers persons”, fastest with “a thief to the gallows”. Jaques reports the clown Touchstone “drew a [sun]dial from his poke” which reminds him of the inevitability of aging as time passes, “from hour to hour we ripe and ripe”.

Time’s now stopped for the gilded galleon, silent and motionless in its glass case, but it remains both a tribute to the person who made it and a symbol of the time in which it was made.

This entry was posted in Legacy, Shakespeare's World and tagged As You Like it, British Museum, Clock, Galleon, Germany, Hamlet, Hanover, Mechanical, Shakespeare, Time, Watch. Bookmark the permalink.

2 Responses to Time and the gilded galleon