Ralph Fiennes and Coriolanus on film 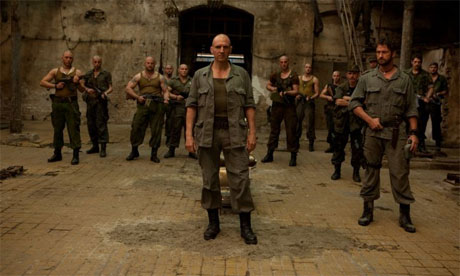 In the UK we’re in party conference season, where the political parties have their annual meetings: there’s much jostling for position while leaders try to reaffirm their dominance. And in the USA, although there’s over a year to go until the next presidential election, a number of candidates have already formally announced they’ll be running. In both systems standing for election puts politicians under close scrutiny and any slip can be catastrophic to their chances.

Coriolanus is Shakespeare’s most political play, and asks many questions about power and the political process. It’s not an easy play to watch: there’s no sub-plot, no comic relief. Coriolanus himself is the centre of attention in almost every scene, and Shakespeare makes sure that the audience never quite know what to think of him. He’s a supreme soldier and leader of troops in time of war, but has none of the skills to make him effective in peacetime politics. Do we admire him for his honesty, even if we find his opinions distasteful, or condemn him for his violence and unwillingness to compromise?

In order to be voted consul, Coriolanus has to win popular approval, tricky when in the first lines of the play he’s described as “chief enemy to the people”. His only hope is to be able to disguise his true feelings, in effect to learn the skills of the actor. His mother encourages him to “perform a part thou hast not done before”. He knows it’s “a part which never I shall discharge to th’life”.  He finds the whole idea distasteful:

Must I
With my base tongue give to my noble heart
A lie that it must bear?

He knows he will have to dissemble as much as the harlot, the knave and the beggar.

Away, my disposition, and possess me
Some harlot’s spirit! My throat of war be turned,
Which choired with my drum, into a pipe
Small as an eunuch or the virgin voice
That babies lulls asleep! The smiles of knaves
Tent in my cheeks, and schoolboys’ tears take up
The glasses of my sight! A beggar’s tongue
Make motion through my lips, and my armed knees,
Who bowed but in my stirrup, bend like his
That hath received an alms! 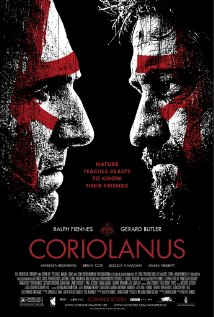 A new film of Coriolanus, directed by and starring Ralph Fiennes, will be released in the next few months. The film’s well-timed to be in cinemas in the USA in December, January in the UK. Fiennes has given some interviews about the film.

The trailer’s action-packed, and I’ve read reviews suggesting it’ll be popular with fans of war films, while also a triumph for Fiennes. The poster suggests it’s principally about the rivalry between Coriolanus and his rival Aufidius.

Let’s hope it also gives weight to the compelling discussions about politics and the nature of power which sit at the heart of Shakespeare’s play. Who rules, and how accountable should our rulers be? How much of a role should the common people have? Should people show more loyalty to their families or their country?

Shakespeare’s earlier plays about civil war centred on the chaos that resulted when warring families all claimed the right to rule, not how the country should be governed. Coriolanus looks towards the future: not many years after Shakespeare’s lifetime Englandwas once again at war with itself, in revolt against a monarchy that liked to think it ruled by divine right. The questions about how we are ruled, as well as by whom, make the play as relevant now as it was then.

This entry was posted in Legacy, Plays and Poems and tagged Coriolanus, film, Ralph Fiennes, Shakespeare. Bookmark the permalink.

8 Responses to Ralph Fiennes and Coriolanus on film