Michael Rosen and Shakespeare for children 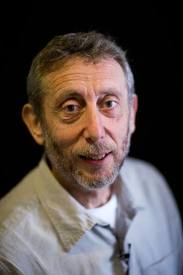 I recently spent a day at the Cambridge Shakespeare Conference, its theme Shakespeare: sources and adaptations.  It opened with a thought-provoking lecture by Michael Rosen, Children’s Laureate 2007-2009 and Shakespeare enthusiast. To an audience who needed no convincing of the importance of Shakespeare or poetry he asked two big questions “How do you familiarise young people with Shakespeare?” and “How do you transmit ideas about poetry?

He suggested that childrens’ authors “talk to the child we were”, but how many of us really remember what turned us on to Shakespeare or poetry? And seeing how much the world has changed since any of us were children, how can we help today’s children to get as much as we all do from Shakespeare?

As Children’s Laureate his job was “to rush about being enthusiastic” and he treated us to a description of some of the methods he’s used in the past to enthuse children about Shakespeare as well as making some suggestions for things people might try.

His most compelling anecdote, and the one which I think we all sympathised with, was the story of the school he visited expecting to run a session with 15-16 year olds, only to find that the children were only 11. He had selected a scene that he thought teenagers would respond to, the scene in Romeo and Juliet where Juliet is rejected by her parents because she refuses to marry the man they choose for her. With no opportunity to rethink, he carried on regardless, getting the children to break up into groups to interpret part of the scene. He was astonished by the strength of the emotional response of the children. The moral, I think, is that we should not patronise younger children by assuming that they can’t get anything from Shakespeare just because they don’t understand every word.

Among his other suggestions was one which has become very popular: looking at the play from the point of view of one of the characters in it, as Tom Stoppard’s wonderful play Rosencrantz and Guildenstern are Dead does. An example of this was seen during the conference when Tim Crouch’s one man play I Caliban was performed by Jimmy Whiteaker. Tim Crouch has made a bit of a career of these plays which “involve the audience in a direct way and focus on telling the story of each play through the eyes of a character who watches the main action from the sidelines”. He’s also written and performed I Banquo, I Peaseblossom and I Malvolio, the last of which is currently touring. Also part of the conference was a rehearsed reading of a new play by Rory Stallibrass, Mamillius, based on the character in The Winter’s Tale.

Active participation is the thread that runs through much of the educational work currently being done on Shakespeare, like the RSC’s Stand Up for Shakespeare campaign.

Alternative approaches that particularly appeal to younger people came in for discussion in the Shakespeare in Unconventional Media session, not part of the formal education strand. Why not try to involve young people using communication methods they already use, like Facebook and Twitter?  Alicia Williams’ paper tackled these ideas, and she kindly gave me a copy of her paper which I hope she doesn’t mind me referring to.

Her paper looked at two projects based, again, on Shakespeare’s Romeo and Juliet. One, called Live Music, encouraged people to contribute via Facebook to an animated film. Those taking part could download storyboards and designs, and all the shots submitted were visible for voting and review before being incorporated into the final 6-minute film.

The second example was the RSC’s Such Tweet Sorrow which depended on six actors adopting online personas from the play, sending tweets based on daily guidance documents supplied to them. Each of the personas received and acted on tweets from their followers. Juliet, not surprisingly the most popular of the personas, built up over four and a half thousand followers in the course of the project. It’ll be interesting to see how projects using social media continue to develop over the next few years, involving more and more participants in imaginative ways.

For my own full engagement with Shakespeare I have to thank my English teacher, Miss Jones, who set my first A level essay question, “What expectations does the first scene of Hamlet raise in the audience?” This question made me look really hard at the words on the page and use my own imagination to create a performance based on what Shakespeare wrote.  It was a great gift and one I’m still grateful for. A few years later I was lucky enough to see some brilliant productions of Shakespeare that lived up to the performances I’d imagined in my “mind’s eye”, performed by actors who spoke Shakespeare’s words superlatively.

I know I’ve been fortunate, and I’d be delighted to hear from anyone who would like to share their special Shakespeare moments.

This entry was posted in Plays and Poems, Shakespeare on Stage and tagged Cambridge, education, Michael Rosen, poetry, Romeo and Juliet, Shakespeare, Such Tweet Sorrow, Tim Crouch. Bookmark the permalink.

7 Responses to Michael Rosen and Shakespeare for children