Posted on September 2, 2011 by Sylvia Morris 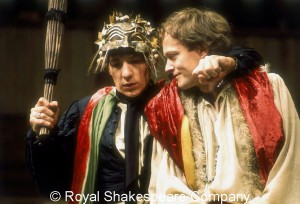 Ian McKellen as Romeo and Michael Pennington as Mercutio

Last week I saw Eduardo de Filippo’s play The Syndicate, currently touring UK towns and cities. It stars two great Shakespearean actors, Ian McKellen and Michael Pennington. Watching them in this subtle play it occurred to me that the last time I’d seen them together onstage was in 1977 in Romeo and Juliet at the Aldwych, where they’d played Romeo and Mercutio respectively. It was a heady time for the RSC. What I loved was the sense of company: Romeo and Juliet set in Renaissance Italy one night, a musical version of The Comedy of Errors in a Greek tourist resort the next, many of the same actors in both, performing with terrific panache. 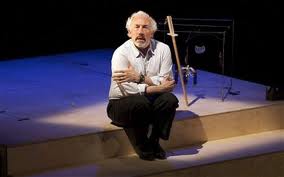 Simon Callow in Being Shakespeare

Both men have since had outstanding careers in Shakespeare and other drama. They’ve both also performed one-man shows about Shakespeare, Acting Shakespeare by McKellen and Sweet William by Pennington. This year I’ve also seen Simon Callow in his show Being Shakespeare and Roger Rees in What you Will. Incidentally Roger Rees played Benvolio in that same production of Romeo and Juliet. 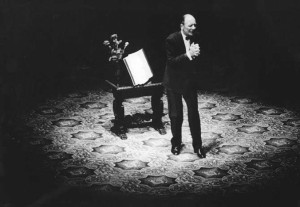 One-man shows about Shakespeare have a long history. John Gielgud, one of the greatest actors of the twentieth century, performed his Shakespeare recital Ages of Man from 1957-1979.  The recital was based on an anthology by the influential Oxford professor George Rylands, and Gielgud won a Tony Award, an Emmy and a Grammy for it. This interview with Gielgud includes, towards the end, a clip from the film of Ages of Man;
http://www.youtube.com/watch?v=65seXyvD7H4 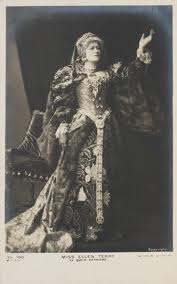 The idea for Gielgud to put on his own Shakespeare performance came from his great-aunt, Ellen Terry, easily the most famous actress of the late nineteenth century. When she became too old to play them onstage, she performed extracts from her famous roles in Shakespeare’s Heroines.

Just recently Judi Dench was interviewed on BBC Radio 4’s arts programme Front Row. One of Mark Lawson’s questions was about solo shows, and her answer was very revealing about her approach to working onstage.

I wouldn’t do a one-woman show. It would be death for me. I would not know who to get ready for. I suppose it’s the support, and what appeals to me is the fact there’s a group of people…so there’s author, director, cast, audience and it’s something to do with that process of telling that story that I love… but I don’t want to do it on my own.

I suspect that love of collaborative working in the theatre is something that Shakespeare would recognise. He wrote for a group of people he knew, and he would have imagined as he wrote how they would speak the lines, how they might move. He’d have heard stories of seafaring, gossip and odd turns of phrase in alehouses and in the streets. The film Shakespeare in Love shows Shakespeare writing in private, while picking up snippets (and even play titles) from all kinds of sources, and bouncing ideas around with friends and colleagues.

There’s a lovely section near the beginning of Romeo and Juliet where Romeo, who has been desperately in love with the unattainable Rosaline, meets his friends for an exchange of high-spirited laddish banter. His friend Mercutio says:

Why, is not this better now than groaning for love? Now art thou sociable, now art thou Romeo; now art thou what thou art, by art as well as nature.

One-man plays are hugely enjoyable, giving actors the chance to show off their virtuosity, but it’s the interaction of theatre that really gives it appeal for audiences as well as professionals.