Shakespeare’s plays in his lifetime: the Cambridge Conference 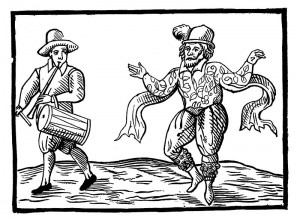 One of the sessions in the recent Cambridge Shakespeare Conference was on Shakespeare’s Plays in his Lifetime. Frustratingly little is known about the performance of Shakespeare’s plays and how they were originally received so I looked forward to hearing from people who are carrying out active research.

Each of the three papers took a different aspect of the subject: one about how Shakespeare reflected contemporary political events, another about the complicated relationships between plays and writers, and the third about the activities of provincial acting companies.

Alisa Manninen, from the University of Tampere, reminded us that Macbeth can be perceived not just as a compliment to the new Scottish King, James 1, containing references to his known interest in witchcraft and his own lineage, but also as a political play optimistically suggesting that the union of the two countries will produce a period of freedom from rebellion. The contrasting views of England (stable and peaceful) and Scotland (divided and dangerous) in the play certainly did not represent the reality of the situation.

Steve Roth ventured into the murky waters of the so-called War of the Theatres. He illustrated his paper with quotations showing how much Shakespeare’s Hamlet built on the already-popular genre of revenge drama, containing deliberate echoes of earlier plays. He quoted a speech from the play The True Tragedie of Richard III, published anonymously in 1591-2. This is part of Richard’s speech before his death:

In Shakespeare’s play, Hamlet calls for the murderer in the play within the play to begin:

It’s recorded that Jonson was paid to make new additions to “a book called Richard Crookback”, which might have been this same play, as well as to The Spanish Tragedy and others.  Did Shakespeare deliberately mock Jonson’s work when he came to write his own revenge tragedy? Was the play of Hamlet itself the “purge” which according to one of the Parnassus Plays, Shakespeare gave to Jonson?

None of the plays for which Jonson wrote revisions were acknowledged in his Folio, published in 1616, making a clear distinction between his bread and butter rewriting work and the creative writing of which he was so proud.

While it’s interesting to speculate, Roth reminded us that this period of theatre history is complex, and it’s impossible to prove the extent of Shakespeare’s involvement.

Siobhan Keenan from De Montfort University gave a paper looking in detail at a reference to two of Shakespeare’s plays performed in Yorkshire in 1609-10. The plays are mentioned incidentally: in 1611 the Simpson Players found themselves caught up in a Star Chamber case against Sir John Yorke of Nidderdale, owner one of the houses which they visited. One of their plays was perceived as “popish”, and in their defence an actor listed other plays they had performed including: “Perocles, prince of Tire, And […] king Lere”. These “so plaid were vsuall playes And such as were acted in Comon and publick places and staiges”.

The company in question consisted of nine working men, mostly related to Christopher Simpson, a cordwainer. Records show that a few years after the case the troupe performed at nine different houses in the area over the first two weeks of January, the end of the Christmas holidays. Comparisons with the “hard-handed men that work in Athens” who perform for Duke Theseus on his wedding day in A Midsummer Night’s Dream are irresistible.

The choice of plays is interesting. Both Pericles and King Lear had recently been published, so the texts would be available for other companies to perform. Provincial audiences seem to have been keen to see the same plays that were popular in the capital, even though they might be thought too ambitious for a small itinerant group to try. Can we assume that Shakespeare’s reputation was such that his plays were in particular demand?

It seems likely that provincial acting companies actively sought out printed plays, using them as the basis for prompt books for their own performances. Although it wasn’t mentioned as part of the paper, the fact that these published plays were performed confirms that the London acting companies who owned the scripts, were justified in not supporting their publication. As soon as they had been published they could easily be taken and performed by other companies. Unlike the poems Venus and Adonis and The Rape of Lucrece there’s very little evidence that the plays were intended to be printed.

It’s to be hoped that more evidence of Shakespeare’s plays being performed across the country will emerge, especially as the University of Toronto’s Records of Early English Drama project continues.

Many thanks to the three participants for contributing to this interesting session and to Duncan Salkeld for convening it.

This entry was posted in Plays and Poems, Shakespeare's World and tagged Cambridge Shakespeare Conference, Hamlet, King Lear, Macbeth, Pericles, Shakespeare, The War of the Theatres. Bookmark the permalink.