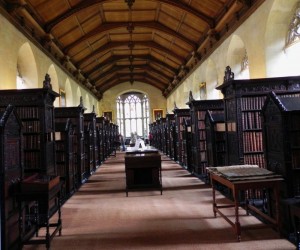 From 9-11 September Heritage Open Days all over the country celebrated the history, architecture, art and gardens of the UK.  The City of Cambridge opened up many of its historic sites, and while staying in the city I visited the display of Treasures at the Old Library in St John’s College.

In 2011 St John’s College is celebrating five hundred years since its foundation by Lady Margaret Beaufort, the mother of Henry VII. One of the items on display was owned by her, a woman who had an extraordinary life. She was married four times, outliving all her husbands. She gave birth to her first son at the age of only 13 and lived to see both her son and grandson crowned kings of England. 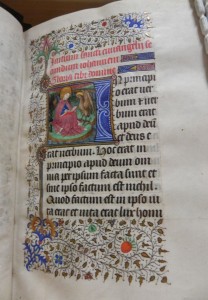 Her illuminated book of hours contains prayers and readings in Latin as well as exquisite illustrations. It’s thought to have been created in France around 1440 and used by her towards the end of her life. The illustration shows St John the Evangelist with his emblem, also that of the college, the eagle.

St John’s is one of Cambridge’s oldest and most distinguished colleges. Three plays known as the “Parnassus” plays were written and performed by students of St John’s around 1600. These mention Shakespeare, but I hadn’t realised how many people with Shakespeare connections were students at the college. These include Roger Ascham, William Cecil, John Dee, Thomas Nashe, Robert Greene and most importantly Henry Wriothesley, 3rd Earl of Southampton. Wriothesley was Shakespeare’s patron to whom he dedicated Venus and Adonis and The Rape of Lucrece, both specifically mentioned in the Parnassus plays.

He was a royal ward under the care of William Cecil, Lord Burghley, who had also studied at St John’s, and graduated aged only 16 in 1589. He’s also indirectly responsible for the building of the Old Library. Later in his life he encouraged William Crashaw, a noted poet and bibliophile, also a graduate of St John’s, to pass his books on to his old college.  Crashaw had “gathered up out of many nations, one of the most complete libraryes in Europe” and in 1615 he offered the College his 500 manuscripts and up to 3000 printed books. He credited Wriothesley with the idea. 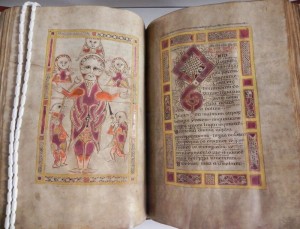 Crashaw suggested a better room was needed to house the collection, prompting the building of the library, and passed all the books over to Wriothesley until it was completed. The building was finished in 1624, the same year Wriothesley died.  It’s a beautiful example of Jacobean architecture, and still contains the original carved oak bookcases. Among the Treasures on display was the late 10th Century Irish Psalter, the oldest complete book in the College’s collections, one of the manuscripts from Crashaw’s collection which came to the College via Wriothesley. The image is of a stylised representation of the crucifixion of Christ. 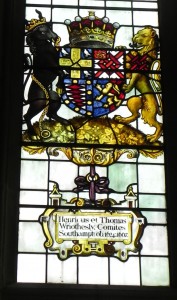 The Wriothesley coat of arms

The window that overlooks the River Cam contains a stained glass panel commemorating Wriothesley’s contribution to the College’s library and its collections.