World Shakespeare Festival: is all the world a stage? 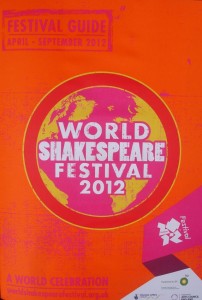 The plans for the biggest Shakespeare Festival ever to be staged have just been released. The World Shakespeare Festival will run from 23 April until September 2012, bringing artists from all over the world together in a UK-wide festival in venues including Stratford-upon-Avon, London, Newcastle, Birmingham, Bridgend, Brighton and Edinburgh. The Festival Guide lists hundreds of events that’ll be taking place including the Open Stages strand in which 263 amateur productions will be staged.

The RSC, which is organising the Festival, is no stranger to managing big events. In 2006-7 it successfully organised the Complete Works Festival in which all Shakespeare’s plays and poems were performed over a complete year, by a mix of companies from around the world.

Some of the events sound fascinating: Shakespeare’s Globe has set itself the challenge of welcoming guest companies performing 37 plays in 37 languages from Armenian to Yoruba over a period of six weeks, showcasing Shakespeare’s global appeal. Elsewhere, some of our most distinguished actors will be taking part: Jonathan Pryce will play King Lear at the Almeida and Simon Russell Beale will appear as Timon of Athens for the National Theatre. The RSC itself promises some fascinating productions: a Julius Caesar set in Africa, a Brazilian take on the Wars of the Roses, Two Roses for Richard III, and The House of Fairy Tales trail through the life of Shakespeare and his plays.

So why do I feel a bit disappointed? The Shakespeare Festival is the culmination of the Cultural Olympiad which runs alongside the Olympic Games. Like many other people I was unable to get tickets but I know I’ll be able to get a brilliant view of events, free of charge, by watching the Olympics on TV.  I may not get the thrill of being actually there, but I know that when I watch the final of the men’s 100 metres I’ll be one of hundreds of millions holding my breath, willing Usain Bolt to smash the world record of 9.58 seconds.

But where are the big, must-see, participatory events in the World Shakespeare Festival, the ones that will bring people together with a real sense of celebration?

Michael Boyd has said about Shakespeare “People of all races, creeds and continents have chosen to gather around his work to share stories of what it is like to be human. To fall in love or fall from grace. To be subject to the abuse of power or to live with the dreams of angels in the shadow of our own mortality”.

These are fine sentiments, but by concentrating on theatre productions of Shakespeare surely the Festival is preaching to the converted, to people who are already theatre audiences or Shakespeare fans? The events aren’t cheap: many productions start at £12. The British Museum exhibition will cost £14, and the three day education conference, Worlds Together, at Tate Modern, will cost an eye-watering £395. What of the people who can’t afford these prices, who’ve never set foot in a theatre, or who live in the back of beyond?  If I lived in Cardiff, Manchester, or Inverness, let alone Johannesburg or Tokyo, I’m not sure I’d feel very involved. 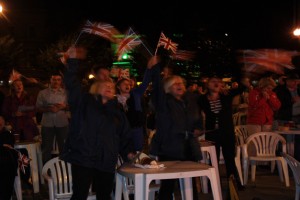 We’ve all experienced great events like the Last Night of the Proms, shared not just by people at the Royal Albert Hall, but people attending a parallel concert in the park, those watching on live relays around the country and viewers on TV all over the world. I recently attended the National Theatre Live performance of One Man, Two Guvnors, a joyous evening made even more enjoyable by knowing that it was being simultaneously broadcast to cinema audiences worldwide. How much would it mean to people in India, China or Brazil to see performers from their own country performing Shakespeare in England? 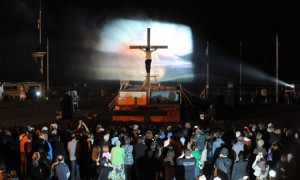 Earlier this year, over the Easter weekend, the Port Talbot performance of The Passion, over 72 hours, was seen to be “changing the shape of participatory performance”. It used a whole range of methods including YouTube and Twitter to involve what Lyn Gardner in her fascinating report for the Guardian called “a hyper-connected 21st-century audience, particularly those who seldom go anywhere near a theatre building”.

Shakespeare’s special gift is to bring people from around the world together regardless of culture, age or income. Surely there should be something in the World Shakespeare Festival that will confirm, especially for the less privileged, that Shakespeare deserves to be “the favourite playwright and artist of the whole world”?

8 Responses to World Shakespeare Festival: is all the world a stage?