Stephen Fry and the English language 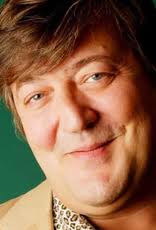 Stephen Fry has just reached the end of his five-part series Fry’s Planet Word, in praise of the English language. Saving the best until last Fry looked at English story-telling through poetry, drama, fiction and even songwriting. It’s available now on I-Player

Fry brought in well-known practitioners from a variety of backgrounds such as screenwriters, film-makers and publishers, to talk about the writing of Tolkien, George Orwell, James Joyce and Bob Dylan.

Inevitably Shakespeare took a leading part in this programme, and Fry talked about the blossoming of the English language that took place during Shakespeare’s lifetime before interviewing a number of actors who’ve performed his work, including the irrepressible Brian Blessed and several who have played the part of Hamlet with distinction: David Tennant, Simon Russell Beale and Mark Rylance.

He also included the wonderful spoof, where Hugh Laurie as Shakespeare, has his “To be or not to be” speech rewritten for him by Rowan Atkinson, who’s in full Blackadder mode, as the theatre manager or editor trying to make the play commercial. I’d been saving this clip up to share with you, so I was delighted to see it in the programme. Here’s the whole thing.

One Response to Stephen Fry and the English language