Very like a whale: Adventures in the far North, Part 2 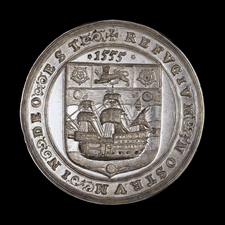 Seal-die of the Muscovy company

In Part 1 I looked at some of Shakespeare’s references to whales, and the history of whaling in Spitsbergen. This time I’m looking at the stories of adventurers who headed north.

The very first English trading company was established by Act of Parliament in 1556,  “The Fellowship of English Merchants for the Discovery of New Trades” commonly known as the Muscovy Company. The main commodities traded with Russia were listed as “Tallow, wax, flax, … cow-hides, cordage and hemp”. Other companies followed: the Barbary Company was formed in the 1570s, and the East India Company in 1600. Russians would have been seen in London: the four young men in Love’s Labour’s Lost disguise themselves, for comic effect, as “Muscovites or Russians” and are asked:
Why look you pale?
Seasick, I think, coming from Muscovy.

Shakespeare knew about the weeks of continuous darkness experienced north of the Arctic Circle. In Measure for Measure Angelo tires of listening to a long story: “this will last out a night in Russia when nights are longest there”.

The potential for whaling was recognised in 1576 when a monopoly to hunt was granted to the Company, but it wasn’t until 1594-5 that English ships went to procure whale products, though not to hunt. At around the same time Dutch adventurers were searching for the North-East passage to the orient and the great Dutch explorer William Barents discovered Spitsbergen. In 1596 encroaching ice forced his crew to build a hut on the bleak uninhabited island of Novaya Zemlja north of Russia. In an account it was stated that they “Lived in the house from the 12 October anno 1596 all the whole winter through till 13 June of the following year 97 in great cold” The fifteen men who survived to set sail in two open boats were so weakened that three of them, including Barents himself, died before being picked up 1600 miles from Novaya Zemlja.

In 1871, nearly three hundred years after it had been abandoned, their hut was found, buried in snow but still containing many objects including the account quoted above. 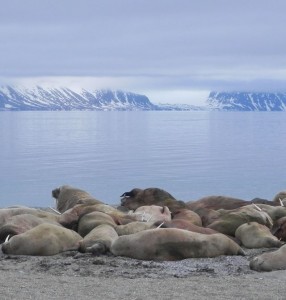 Walruses on an island in Spitsbergen

The first English expedition was in 1603, to Bear Island, south of the main archipelago. There they found large numbers of walruses, killing a reported 600. Although large animals with dangerous tusks, they pull out onto land in groups making capture relatively easy. In 1610 a ship was sent to the main part of Spitsbergen and reported “great store of whales”. The first expedition specifically sent to hunt whales was the English one of 1611. Several ships carried one hundred and seven men including six Basque harpooners from Northern Spain(the only Europeans experienced in killing whales). The instructions issued to Thomas Edge, the Muscovy Company agent, include a note to treat the Basques “very kindely and friendly” and to learn from them “that businesse of striking the whale as well as they”. Whales were caught but the ships were lost, then in a return voyage in 1612 seventeen whales were taken yielding 180 tons of oil. Dutch whalers sent similar expeditions, and after some pointless skirmishes the two groups agreed a compromise by which they shared the coast.

A wonderful account of the 1613 expedition includes a full description of the hunt. Several small rowing boats called shallops set off together, each one containing a harpooner. Once hit with a single harpoon the whale would drop to the bottom of the sea, and the sailors might have to let out 60 fathoms of rope. After a few minutes the whale would come back up, and would fight for its life: “he comes not directly up above the water, but swims away with an uncontrolled force and swiftness; hurrying the shallop after him…When he hath thus drawn her perhaps a mile or more, – which is done in a very short time, considering her swiftness, – then will he come spouting above the water; and the men row up to him, and strike him with long launces …But when he is wounded, he is like to wrest the launce out of the striker’s hand …and now will he frisk and strike with his tail very forceably; sometimes hitting the shallop, and slitting her asunder; sometimes also maiming or killing some of the men. And for that cause, there is always either two or three shallops about the killing of one whale…He will sometimes draw the shallops 3 or 4 miles from the place where he was first stricken with the harping-iron.”

In Troilus and Cressida, Troilus suggests that Hector has the same effect on the Greek soldiers as a whale had on sailors in rowing boats:
There is a thousand Hectors in the field;
….. anon he’s there afoot,
And there they fly or die, like scaling sculls
Before the belching whale.

The illustration shows much of the process, including the coppers in which the whale’s blubber, chopped into tiny pieces, was heated to release its oil. A Greenland right whale could produce 100 tonnes of oil which could be used to produce soap, lamp-oil, or to waterproof clothes. In The Merry Wives of Windsor Falstaff is likened to a whale:

What tempest, I trow, threw this whale (with so many tuns of oil in his belly) ashore at Windsor? How shall I be reveng’d on him? I think the best way is to entertain him with hope, till the wicked fire of his lust have melted him in his own grease.

English whaling declined after other nations became better organised, and English adventurers continued to develop trading links in other parts of the world. We’re used to hearing how much Shakespeare owed to the culture of the Mediterranean, but stories of the almost-unbelievable landscapes and hardships of the arctic north may also have formed part of his imaginary landscape.