Very like a whale: Adventures in the far North, Part 1 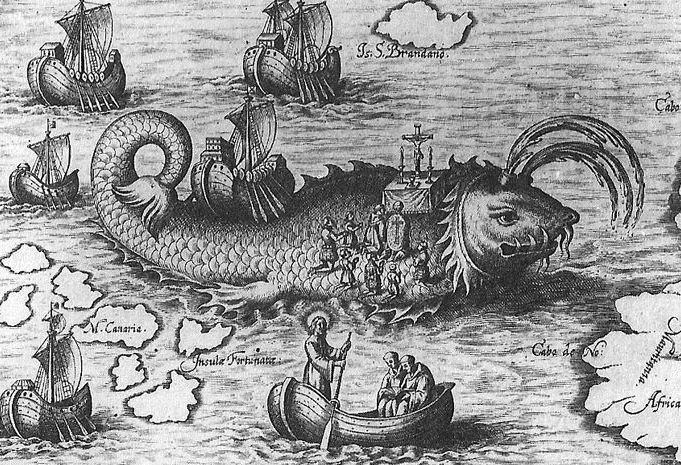 A sea monster from the1621 Novi Orbis Indiae Occidentalis, representing the legend of St Brendan

Most people are familiar with the phrase “very like a whale”, used nowadays to indicate a mocking disbelief. It is, of course, Shakespeare, from the scene in which Hamlet, in his antic disposition, taunts the “tedious old fool” Polonius by comparing the shape of a cloud first to a camel, then to a weasel, then to a whale. Polonius has to politely agree with the mad prince.

In the camel and the whale, Shakespeare picked two exotic animals which his audience would have known from the bible readings they heard read in church each week. The story of Jonah being swallowed by the whale then belched up onto land creates a vivid image. Shakespeare refers to it indirectly in Pericles where Thaisa’s coffin is cast up on the shore. The men who find it think it holds treasure:

If the sea’s stomach be o’ercharg’d with gold,
‘Tis a good constraint of fortune it belches upon us.

“Did the sea cast it up?” Asks the Doctor, Cerimon. “I never saw so huge a billow…as tossed it upon shore” his servant replies.

Also in Pericles, fishermen moralise about how for men on land, like the fish in the sea “the great ones eat up the little ones”:

I can compare our rich misers to nothing so fitly as to a whale: ‘a plays and tumbles, driving the poor fry before him, and at last devour them all at a mouthful. Such whales have I heard on a’ the land, who never leave gaping till they swallowed the whole parish, church, steeple, bells, and all.

Whales are seen off the shores of the UK and even, on occasion, lose their way and get stranded in the Thames estuary where, sadly, they usually die. Once beached on land, struggling rarely frees them. Shakespeare refers to this:

Till that his passions, like a whale on ground,
Confound themselves with working.

Until recently it had never occurred to me that there had ever been an English whaling industry, or that the English had explored to the archipelago of Spitsbergen, far north of Norway. But they did both, and during Shakespeare’s lifetime. 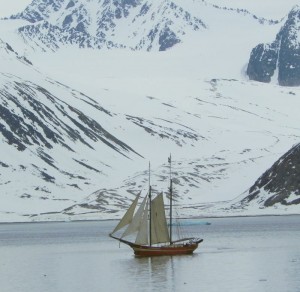 A modern sailing boat in Spitsbergen

In June of 2010 I was lucky enough to visit Spitsbergen, and each day we left our comfortable ship to explore the land in small inflatable boats.  One day we visited a colony of walrus, another we hiked across the snowy landscape on the lookout for polar bears and other mammals, and on another we landed on an isolated stretch of icy land where it was still possible to see the remains of huts and the tanks where whale blubber was boiled up to release oil. We heard stories of people forced by the closing in of sea ice to spend the whole winter in the darkness of Spitsbergen until spring brought a chance of escape or rescue. At one point we passed what appeared from our ship to be a tiny sailing boat, which reminded me how small the whaling ships were, and the boats used for hunting holding only a handful of men. In the museum in Longyearbyen, the only settlement of any size, items of clothing dating back to Shakespeare’s period, found preserved by the cold, are displayed.

I’d never given much thought to those references in Shakespeare to whales. But after my visit to Spitsbergen I realised that Shakespeare probably heard stories about this wild and forbidding area and the creatures which his compatriots were hunting. How did people from England, where there was no tradition of whaling, get involved in this terrifying business, in this desolate place?

The explanation goes back to the search for better trading routes to Asia: an ice-free north-east or north-west passage would have saved a huge amount of time and money by removing the need to go all the way round Africa in the one direction or South America in the other direction. During early expeditions looking for these routes sailors reported seeing whales, but to begin with there was no thought of catching them. Next week I’ll be writing a post exploring the history of trade with northern countries and the development of whaling in Spitsbergen.

One Response to Very like a whale: Adventures in the far North, Part 1