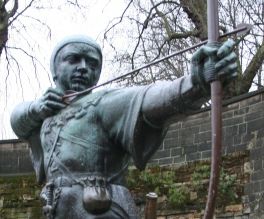 The Robin Hood statue in Nottingham

A new play by David Farr, called The Heart of Robin Hood, is just about to open at the Royal Shakespeare Theatre.

The legend of Robin Hood is a great subject for the RSC as it was obviously a story Shakespeare knew well. It comes to his mind when he’s looking back to a more comforting past. The scene in Justice Shallow’s orchard, in Henry IV part 2, is one of those. A group of old men sit around reminiscing about the good old days. All through the scene, one of them, Silence, sings snatches from old songs, one of which is “of Robin Hood, Scarlet and John”. That’s his last line before the news arrives that the old King is dead and young Prince Hal is now to be crowned. While plans are made celebrating the dawn of a new era, Silence is carried offstage to his bed.

At other times Shakespeare introduces the world of Robin Hood to the stage. No sooner do they meet him than the outlaws in The Two Gentlemen of Verona adopt Valentine as their leader:
By the bare scalp of Robin Hood’s fat friar,
This fellow were a king for our wild faction!

And in As You Like It two worlds collide. The old Duke has been banished by his usurping brother, and has fled:
They say he is already in the forest of Arden, and a many merry men with him; and there they live like the old Robin Hood of England. They say many young gentlemen flock to him every day, and fleet the time carelessly, as they did in the golden world.

Pretty shepherds and shepherdesses, straight from the fashionable world of pastoral romance, fall in love and share the space with the outcasts, but the forest isn’t as idyllic as the pastoral poets suggested: there’s cold weather, fierce animals, and the threat of interference from the outside world.

By Shakespeare’s time the legend was already old. Nobody is clear when or where it first appeared. Although Robin is now firmly associated with Sherwood Forest and the Nottingham area, he’s also been linked with other places, even the village of Loxley, near Stratford-upon-Avon where in 1193 the Lord of Loxley Manor was Robert Fitz-Odo, a noblemen of Norman descent who mysteriously lost his land.

The story even finds its way into Shakespeare’s life: one of the most persistent myths is that he poached deer from Sir Thomas Lucy, whose threat of prosecution forced him to flee, not into the forest, but to London. This story was adopted by the Shakespeare Memorial Theatre in the late nineteenth and early twentieth centuries. In every performance of As You Like It (and there were many) a stuffed stag from Charlecote Park was brought on stage. In between performances the animal was hung high up in the theatre’s Picture Gallery for visitors to admire. 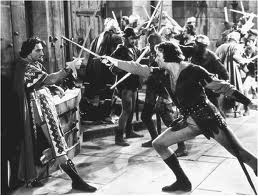 There have been too many versions of this legend to mention, but there are lots of sites to check out if you’re interested. Allen W Wright’s website is full of illustrations and links,  and this site is full of information about the Robin Hood legend. The article on Wikipedia is also extremely full.

The “Robbed from the rich, gave to the poor” line which makes him everybody’s favourite outlaw is a fairly recent addition,  though the story always shows him standing up to authority. Russell Crowe’s 2010 film seems to have taken itself very seriously: “Robin and his band of marauders confront corruption in a local village and lead an uprising against the crown that will forever alter the balance of world power”.

And the RSC’s production promises to be “darker than you’re used to”.
The notorious Robin Hood and his band of outlaws steal from the rich, creating a fearsome reputation amongst those who dare to travel through the mighty forest of sherwood. But they do not share their spoils with the poor and are unloved by the people, who must also pay unfair taxes to the evil Prince John as he plots to steal his brother’s crown. In this time of chaos and fear, it is down to Marion to boldly protect the poor and convince Robin that he must listen to his heart if they are to save the country.

This certainly sounds like a fable for our times. The production begins previewing on 18 November and promises to be spectacular. I can’t wait!

This entry was posted in Legacy, Shakespeare's World and tagged As You Like it, Forest of Arden, Henry IV part 2, Robin Hood, Royal Shakespeare Company, Shakespeare, Sherwood Forest, The Two Gentlemen of Verona. Bookmark the permalink.

4 Responses to Robin Hood and Shakespeare