A few weeks ago I attended one of the Shakespeare Club in Stratford-upon-Avon’s lectures given by Professor Ewan Fernie, on King Lear. It was a thought-provoking look at some of the darkest scenes in this already dark and gruelling play. King Lear has often been called Shakespeare’s greatest play, but it’s also one of the most difficult to sit through. Violence, mutilation, betrayal, murder and madness all feature and in the closing lines of the play the audience is likely to feel just like Edgar who delivers them:

The weight of this sad time we must obey,
Speak what we feel, not what we ought to say.
The oldest hath borne most; we that are young
Shall never see so much, nor live so long

In the 1608 Quarto these lines are assigned to Albany, but it’s accepted practice to follow the Folio, which gives them to Edgar. These lines are most appropriately delivered by the character whose extreme suffering has been shared by the audience.

It was Edgar, or Poor Tom, that Professor Fernie concentrated on in his lecture. He commented that before adopting the identity of Poor Tom, a mad beggar, Edgar is a conventional and rather dull figure, overshadowed by his much more interesting half-brother Edmund. When becoming Tom, Edgar talks and behaves like a madman. Is he feigning, or is he genuinely a man possessed by the devil?

This is the foul fiend Flibbertigibbbet: he begins at curfew and walks till the first cock; he gives the web and the pin, squinies the eye and makes the harelip; mildews the white wheat and hurts the poor creature of the earth.

Swithold footed thrice the wold;
He met the nightmare and her nine foal,
Bid her alight and her troth plight,
And aroint thee, witch, aroint thee. 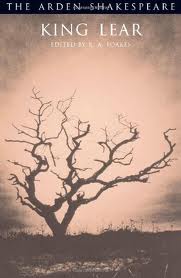 Passages like this are quite a challenge for the editor as these lines are easy to dismiss as gibberish. Academics approaching the play have identified the source for some of Edgar’s speeches, and the character of Poor Tom, as Samuel Harsnett’s wonderfully-titled book A Declaration of Egregious Popish Impostures, published in 1603. Professor R. A Foakes, in the introduction to his Arden edition of King Lear, describes this book as a “polemical attack on a group of Catholic priests who conducted exorcism in private houses” and was “part of an official campaign against exorcism as practised both by some Protestants and by Catholics”. Foakes also notes that “Harsnett often writes with great verve, and his quirky vocabulary and lively imagery were raided by Shakespeare for his characterisation of Edgar as Poor Tom in Act 3, as well as occasionally for words or phrases elsewhere in the play”. The name of the devil in the passage quoted above, for instance, comes from Harsnett.

As well as discussing Harsnett, Fernie also mentioned a line from A C Bradley, the author of the 1904 book Shakespearean Tragedies. I was delighted to hear him mention Bradley as I discovered his book in my school library and remember reading it avidly. Bradley’s method involved writing about the characters in the plays as if they were real, and it’s a credit to Shakespeare’s writing that readers and playgoers feel they know his characters as if they were living people. In the nineteenth century this led to attempts to construct the lives of characters outside the play, for example Mary Cowden Clarke’s 1851-2 The Girlhood of Shakespeare’s Heroines, and led on to Bradley who asked questions like “Where was Hamlet before his father’s death?” and “When was the murder ofDuncan first plotted?”

Even at sixteen I could see that asking these sort of questions about characters in a play was misleading, but I found Bradley’s method a compelling way of approaching the difficulties of the play on the page. Modern critical methods caused Bradley to fall completely out of fashion for the second half of the twentieth century, but it’s noticeable that in the last few years character has begun to be discussed in academic circles. A few years ago John Russell Brown published a reassessment of Bradley’s famous book. And  Ewan Fernie concluded that Bradley had been right to suggest that Edgar when Poor Tom, rather than Cordelia, is the most religious person in the play. If you’d like to take a look at it, the full text of the 1905 edition is available here.

This entry was posted in Plays and Poems, Shakespeare's World. Bookmark the permalink.