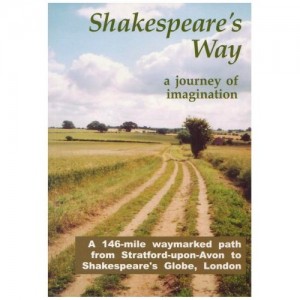 Walking for fun’s not a concept that would have been understood in Shakespeare’s day, and the sponsored walk would have been an even more alien idea. Walking was a necessity, and when Shakespeare left Stratford for London as a young man, he would almost certainly have walked because he had to. The alternative, riding, wasn’t cheap: according to the Stratford Corporation Minutes and Accounts, in the early 1600s hiring a horse to Worcester, only about 30 miles, cost 2 shillings, twenty-four times as much as entry to the Globe Theatre.

In Shakespeare’s plays, walking is less for pleasure than for contemplation: Alexander Iden in Henry VI Part 2, loves his “quiet walks” in his garden, and Hamlet walks for hours in the lobby of the palace at Elsinore. It wasn’t until the Romantic period when Wordsworth wrote his Guide to the Lake District that walking as an outdoor recreation really took off.

In 2006 Shakespeare’s Way, subtitled “A Journey of Imagination”, was launched. This 146-mile walk covers much of the same ground as Shakespeare did walking from Stratford to London. 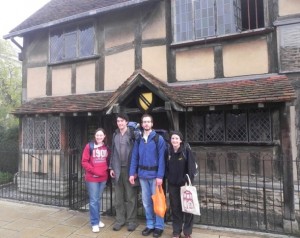 The walkers from the Shakespeare Institute set off from Shakespeare's Birthplace

On Friday a group of walkers set off on their Nine Days Wonder, following this route in order to raise money for the newly set-up charity The Lizz Ketterer Trust. I didn’t know Lizz personally, though during her years at the Shakespeare Institute where she completed her PhD in 2009, she touched many lives. She died earlier this year at the tragically young age of 31, having only just taken up a teaching post at the University of New Mexico. Her friends at the Institute have set up the trust to fund an annual award that will allow a student from Lizz’s home in Winedale Texas to visit Stratford-upon-Avon to immerse themselves in Shakespeare as she did.

The walk is the second fundraising event: a successful performance of Hamlet has already been put on by the newly set up theatre ensemble Ketterer’s Men. The walkers expect to arrive at the Rose Theatre on Saturday 5 November. If you want to find out more, sponsor the walkers, or make a contribution, the information is on the website.

Here’s Shakespeare’s Sonnet 36 which describes the beauty of nature, overshadowed by personal loss:

Full many a glorious morning have I seen
Flatter the mountain-tops with sovereign eye,
Kissing with golden face the meadows green,
Gilding pale streams with heavenly alchemy;
Anon permit the basest clouds to ride
With ugly rack on his celestial face,
And from the forlorn world his visage hide,
Stealing unseen to west with this disgrace:
Even so my sun one early morn did shine
With all-triumphant splendour on my brow;
But, out, alack! He was but one hour mine,
The region cloud hath maskt him from me now.
Yet him for this my love no whit disdaineth;
Suns of the world may stain when heaven’s sun staineth.