Shakespeare’s Christmas through the eyes of the Victorians 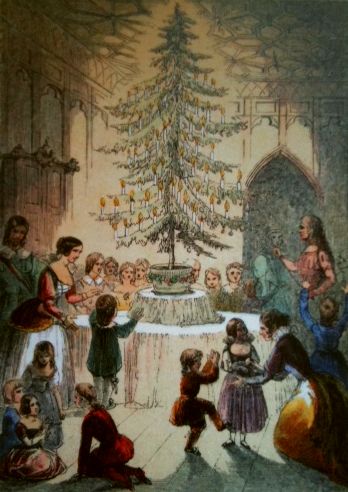 This year I’ve received a Christmas card featuring an engraving dating back to 1846, originally published to illustrate “A Story about a Christmas in the seventeenth century”*. It’s a charming picture, but one thing is certain: Christmas in the seventeenth century was never like this. The room itself looks quite authentic, and the costumes are at least reminiscent of the period. One of the ladies wears a ruff, for instance. But in the centre of the picture stands a table covered in a white cloth, on top of which stands a magnificent pine tree decorated with candles.

Prince Albert is widely credited with introducing Christmas trees into England, but some sources suggest that they were already used in some houses, only becoming popular when Victoria and Albert were pictured with their young family around a decorated tree in the Illustrated London News, as below. In 1848 The Times helpfully described the tree for those who wished to create their own:

“The tree employed for this festive purpose is a young fir, about eight feet high, and has six tiers of branches. On each tier or branch are arranged a dozen wax tapers. Pendent from the branches are elegant trays, baskets, bonbonniers, and other receptacles for sweetmeats, of the most varied kind, and of all forms, colours, and degrees of beauty. Fancy cakes, gilt gingerbread, and eggs filled with sweetmeats are also suspended by variously coloured ribands from the branches.”

These two images are so similar it seems possible the earlier one influenced the later.

In Shakespeare’s time, evergreen plants like holly, ivy and mistletoe would have been brought into the house, though “baleful mistletoe” was banned from churches because of its pagan associations. It was thought unlucky to bring green plants into the house at other times.

Amiens’ song in As You Like It contrasts the festivities of the Christmas period with the bleakness of the weather and the coldness of human behaviour.
Blow, blow, thou winter wind,
Thou art not so unkind
As man’s ingratitude;
They tooth is not so keen,
Because thou art not seen,
Although thy breath be rude
Heigh-ho, sing heigh-ho! Unto the green holly,
Most friendship is feigning, most loving mere folly.
Then heigh-ho, the holly!
This life is most jolly.

The tree that was associated with Christmas was the Yule log. A log large enough to burn throughout the 12 days of Christmas was cut and brought into to house. A piece of the log would be saved to start the fire the following year. The use of evergreen plants, and the burning and keeping of wood is a reminder that Christmas originates as pre-Christian celebration promising the return of the sun to the land at the darkest, deadest time of the year. You’ll find more Christmas traditions here. 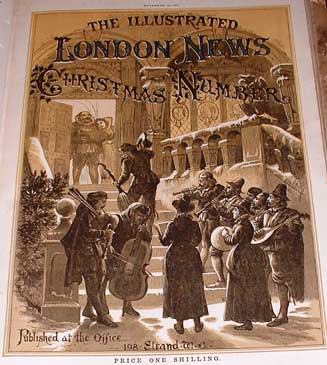 Feasting, music and charity to the poor were essential ingredients of the Elizabethan Christmas. The Victorians loved the Elizabethan period, and in this picture from the Illustrated London News of 1875 shows a group of travelling musicians being invited into a grand house.

In 1557 Thomas Tusser summarised the essentials of Christmas:
At Christmas be merry and thankful withal,
And feast thy poor neighbours, the great with the small,
Yea, all the year long, to the poor let us give,
God’s blessing to follow us while we do live.

Victorians shared this desire to be charitable to the poor at Christmas, and created the idea of Christmas as a family celebration. It’s still seen as the one time of year when families get together, but when Shakespeare was working in London he’s unlikely to have spent Christmas with his family. I’ll be looking at the sort of entertainments professional companies were required to produce for the court in a later post.