Michael Sheen’s Hamlet and the vision of Philip K Dick 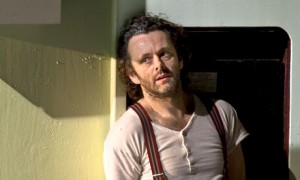 In my last post I mentioned that Michael Sheen was talking on the radio about the life of the science fiction writer Philip K Dick who inspired his Hamlet. The broadcast will be repeated on Friday 9 December at 11pm, and then to listen again, but this may not be possible outside the UK.

Before this programme I’d never heard of Philip K Dick, but Michael Sheen, always a fan of science fiction, became hooked on Dick’s work early, finding his stories to be much more than just tales of space ships and alien invasion. He was joined for this radio programme by science fiction specialist Roger Luckhurst.

They talked about what sets Dick apart from other science fiction writers, his interest in the human psyche and the real versus the imaginary. In the 1970s Dick absorbed the paranoia of current politics and world events, with the Watergate scandal, the fall of Nixon, the Manson murders and the increasing use of surveillance. He asked questions about what counts as an authentic experience in a consumerist world that offers only a filtered view of reality.

Having recovered from being addicted to hallucinogenic drugs he suffered a nervous breakdown, and struggled with mental illness all his life at a time when it carried a much greater stigma than it does now. He became agoraphobic and, hooked on painkillers, lived in chaos.  In spite of all this his books are often humorous, absurd and self-aware. Towards the end of his life he had a religious vision which greatly affected him. 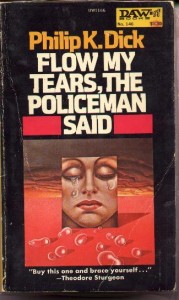 Many of the details of his life suggest parallels with Shakespeare, and it’s possible to see how Michael Sheen may have found inspiration for his Hamlet in his story. Dick was born in Chicago in 1928 as one of twins, but his sister died aged only six weeks, and the guilt of being the survivor haunted him throughout his life. From this may have come the recurring idea that we may be two people, related but separate. He had a troubled relationship with his mother, who married his uncle. He married five times, and had obsessive relationships with women. He died in California, where he had lived for many years, in 1982 at much the same age as Shakespeare.

The cover blurb of one of Dick’s early books, The World Jones Made reads “Floyd Jones is a sullen malcontent, ungainly and quite possibly mad. But he can see exactly one year into the future…His limited precognition ultimately renders him helpless to fight against what he knows will happen”.

Michael Sheen quoted a key passage from Hamlet which he finds particularly relevant to Dick’s life:
So oft, it chances in particular men,
That for some vicious mole of nature in them,
As in their birth, wherein they are not guilty…
Or by some habit… – that these men,
Carrying, I say, the stamp of one defect,…
His virtues else, be they as pure as grace,…
Shall in the general censure take corruption
From that particular fault.

I’d love to have heard this discussion before seeing Michael Sheen’s Hamlet, as it’s clear how much his performance owes to the vision of Philip K Dick. But does it help or hinder the understanding of Shakespeare’s play?