Michael Sheen’s Hamlet: driving out the feminine side 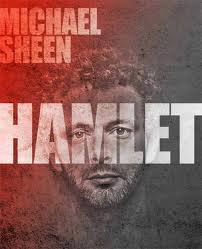 For centuries, critics have noted  Hamlet’s effeminacy: his inability to act decisively, that description as a “delicate and tender prince”. In the eighteenth century the great actor David Garrick was criticised for “giving a kind of feminine sorrow” to his performance, and Tony Howard in his book Women as Hamlet has found that at least 200 professional actresses have performed the role of the Danish prince. In 1881 Edward P Vining suggested that not only are “the charms of Hamlet … essentially feminine in their natures” but came up with the extreme theory, stated in his little book The Mystery of Hamlet, that the Prince is actually a woman in disguise, thus explaining his affectionate relationship with Horatio,“a perfect man”.

In the current Young Vic production, directed by Ian Rickson, there’s no doubting Michael Sheen’s masculinity. But in the world of this production nothing is certain. The pre-show is deliberately disorientating, the audience being taken on a route that circles the auditorium, past treatment rooms and a gymnasium, while being observed by clipboard-carrying staff, finally entering through a glass-sided office which then becomes part of the set. 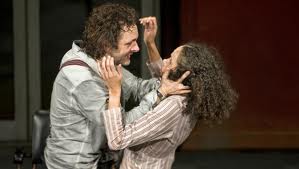 In this secure psychiatric hospital, Hamlet is the most obvious patient, but he’s not the only one. When the main characters sit on chairs arranged in a circle for what is usually the first court scene, who are the doctors, who the patients?  I’ve never been so conscious, in a production of Hamlet, of the vulnerability of the human mind, the destructive power of grief, and of many lives shattered by a single event. A pair of huge metal doors clang shut, trapping the audience as well as the actors in the same room. We’re all in this together. Many of the play’s references to the outside world are omitted and we’re left with the enclosed, claustrophobic world of Elsinore, where nearly everyone seems paralysed.

The physical effects of psychological stress are seen most clearly in the women. In most productions Gertrude begins confidently, her world only gradually beginning to crumble as her son’s actions become more extreme. Here, played by Sally Dexter, she is in trouble almost from the beginning, stumbling around the stage, grinning and giggling, drugged or drunk? Ophelia ((Vinette Robinson) is both physically and mentally wrecked by her father’s death, singing her mad songs while confined to a wheelchair. 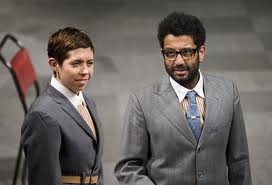 Eileen Walsh as Rosencrantz and Adeel Akhtar as Guildenstern

Two male characters are also played by women. Rosencrantz is strikingly played by Eileen Walsh, severe in costume and demeanour, but genuinely hurt by Hamlet’s question after the play scene: “Have you any further trade with us?”. Her femininity is used to make her response “My lord, you once did love me” come from the heart.

Horatio can seem uncritical of Hamlet, but the diminutive Hayley Carmichael plays the part as a sad and sensitive observer. Hamlet describes him:
A man that Fortune’s buffets and rewards
Hast ta’en with equal thanks; and blest are those
Whose blood and judgement are so well co-meddled,
That they are not a pipe for Fortune’s finger
To sound what stop she please. Give me that man
That is not passion’s slave, and I will wear him
In my heart’s core, ay in my heart of hearts,
As I do thee. 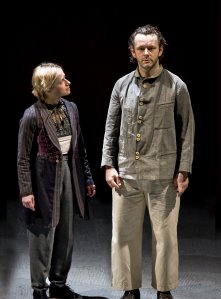 Hayley Carmichael as Horatio and Michael Sheen as Hamlet

It’s to Horatio’s credit, then, that in this production his “blood and judgement” leads him to visibly recoil from Hamlet when told that he has condemned his two friends to death, a step too far. I don’t remember seeing it played like this before, but I’m sure that having the part played by a woman encourages this interpretation.

I’ve come more and more to see the play as a war between the female, the feminine, within a man and the masculine within a man, and the story is effectively how you drive out the woman from a man. And in order to deal with the world which he occupies, the world of the Court, the exclusively male-dominated world where military values and the values of realpolitik are held as absolute, he has to drive out the woman in him… And I think that’s the tragedy.

I’ll be coming back to look at Michael Sheen’s performance, and other Hamlets, in my next post.

2 Responses to Michael Sheen’s Hamlet: driving out the feminine side