Barren winter and the seasons’ difference 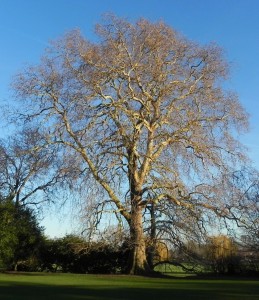 This magnificent tree grows in the gardens between the theatre and the church, next to the river

Until a few days ago it looked as if we were getting the “hot January” which Beatrice claims to be so unlikely, the weather has been so mild.  On a country walk near Stratford last week we cast off scarves and jackets, sat drinking coffee alfresco on the village green, and disturbed skylarks that rose singing from their field into the blue sky. Then at the weekend came some more typical winter weather: sharp frosts, but bright, sunny days, warm in the sunshine. No wonder we’re seeing green shoots in gardens and fields and snowdrops already in flower.

This time of year has a beauty all of its own. Now all the leaves have blown off the trees the delicacy of twigs and branches are on display. You can see the buds where the new leaves will break. The heaviness of summer and lushness of autumn are gone and craggy trunk and muscular branches reach to the sky or twist round in strange shapes. 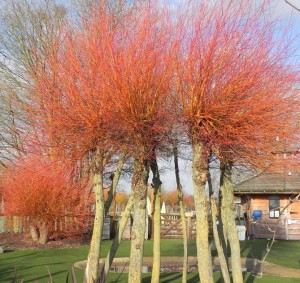 Twigs are often brilliantly coloured in shades of orange or purple.

The change of the seasons is something that Shakespeare cherished about the English countryside, though “chiding autumn” and “angry winter” were to be endured rather than enjoyed. In Henry VI Part 2, Duke Humphrey sees his wife’s humiliation as part of the natural cycle of fortune just like the turning of the year.
Thus sometimes hath the brightest day a cloud,
And after summer evermore succeeds
Barren winter, with his wrathful nipping cold;
So cares and joys abound, as seasons fleet.

In Shakespeare’s most famous description of the changing seasons Titania blames her arguments with Oberon for the unseasonable weather in which “hoary-headed frosts fall in the fresh lap of the crimson rose”.

The song of the Owl and the Cuckoo that closes Love’s Labour’s Lost is a reminder of the hardships of winter for country dwellers in Shakespeare’s time, human and animal. Here’s one of the verses: 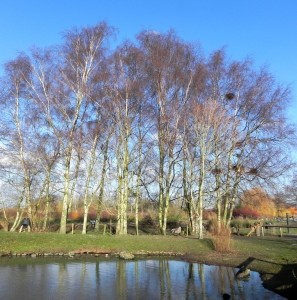 Trees at Slimbridge, on the Severn estuary

When icicles hang by the wall,
And Dick the shepherd blows his nail,
And Tom bears logs into the hall,
And milk comes frozen home in pail,
When blood is nipped, and ways be foul,
Then nightly sings the staring owl, “Tu-whit,
Tu-who!” a merry note,
While greasy Joan doth keel the pot.

So far we’ve been lucky enough to avoid the “birth of trembling winter” while enjoying the changing seasons. It’s a bit too soon, though, to think that spring is on its way.

2 Responses to Barren winter and the seasons’ difference