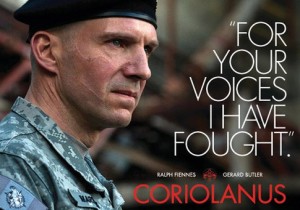 Shakespeare-lovers are eagerly awaiting the release of the film of Coriolanus directed by and starring Ralph Fiennes. Fiennes may be better known to film audiences as Voldemort in the Harry Potter films, but theatre audiences know that his Shakespeare credentials are top-notch and have their fingers crossed that he has not sacrificed too many of Shakespeare’s words. The trailers and stills show that it uses every trick in the box of the action movie. It’s Shakespeare’s most political play, and parallels with the 2011 toppling of dictatorships that became known as the Arab spring will be inevitable. Vanessa Redgrave, who plays the mother of Coriolanus, Volumnia, has said that the film is about what happens when the military code of honour comes into contact with the political world. In her words, “politicians are scoundrels”.

Modern film-making has reached a level of sophistication in which it can now be difficult to tell the difference between movies and the real battle situations as reported on the TV news. I’ve just been looking at a blog, Screenplays, written by John Wyver, which includes posts on the early days of television, showing us how much Shakespeare on screen has changed. 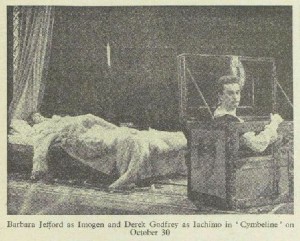 This blog compares presentation of scenes from Shakespeare’s play Cymbeline in 1937 and 1956. These were based on stage productions of the play currently inLondon, the first at the Embassy Theatre, the second at the Old Vic. Both were transmitted live, from Alexandra Palace and Lime Grove, and there is no recording of either. Fortunately the shooting scripts have been preserved which enable researchers to understand how the scenes were shot using a number of cameras.In 1937 BBC TV was only a year old, so transmitting scenes from a Shakespeare play must have been a real experiment. By 1956 cameras could both move and zoom, and in addition could use a crane to get a wider range of shots.

Both versions shot the scene where Iachimo and Imogen meet, followed by the scene in which Iachimo invades Imogen’s bedroom as she sleeps.  I’m sure there were several factors in making this choice. The scenes feature only a few people, and are fairly static. The bedroom scene would be relatively easy to stage and light. But also they are scenes charged with emotion, and Iachimo’s language is some of Shakespeare’s most erotic:
Had I this cheek
To bathe my lips upon: this hand, whose touch
Whose every touch would force the feeler’s soul
To th’oath of loyalty: this object which
Takes prisoner the wild motion of my eye…

The second is a night-time scene which calls out for the intimacy of close-ups. In fact I’m quite surprised that they chose to beam it into the living rooms of unsuspecting viewers since it’s a voyeuristic scene, the sense of violation palpable as Iachimo watches Imogen as she sleeps, pulling back the sheet that covers her and describing her naked body. Here’s part of his speech:
How bravely thou becom’st thy bed! Fresh lily!
And whiter than the sheets! That I might touch!
But kiss, one kiss! Rubies unparagon’d,
How dearly they do’t!

Another Screenplays blog looks at the first Shakespeare outside broadcast of the 1939 Phoenix Theatre production of Twelfth Night.  This review by Grace Wyndham Goldie for the Listener is reminiscent of the experience of researchers watching the simple video recordings made by many contemporary theatre companies of their productions:
But the play, seen in camera shots, made very little effect as a whole. How could it? For it was produced for a huge angle of vision, as wide as the theatre’s proscenium arch and it was seen by way of a tiny angle of vision, one no larger than the lens of a television camera.

Productions now being beamed live into cinemas combine the freshness of the live performance with some of the sophistication of the movie. The new film of Coriolanus will owe much more to the modern action movie than to the world of the theatre. Would Shakespeare approve? This might depend on how his writing is handled, and how much of it has been sacrificed to the technical wizardry of modern movie-making. We’ll all be able to make up our own minds when it goes on general release on 20 January.

3 Responses to Ralph Fiennes’ Coriolanus and Shakespeare on screen