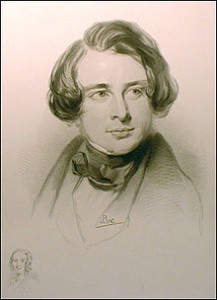 Celebrations for the 7 February bicentenary of Charles Dickens’ birth are taking place all round the world. His exuberant language, eccentric characters, and gripping, often mysterious story lines, combined with his wacky sense of humour and desire for social justice, have made Dickens and his novels loved all round the world.

Dickens was born in Portsmouth and spent his adult life in the London area, but he had many links with Stratford-upon-Avon and Shakespeare. He visited the Birthplace at least twice, in 1838 and 1840, leaving his signature in the visitors’ book. On the second occasion he was accompanied by his wife and his friend and biographer John Forster. He visited Stratford at least once more, for the 1864 Tercentenary celebrations when he saw Twelfth Night performed.

We don’t know what Dickens himself made of the visits, but in Nicholas Nickleby the joke is meant to be on the vain and silly Mrs Wititterly when she says “I find I take so much more interest in his plays, after having been to that dear little dull house he was born in!…I don’t know how it is, but after you’ve seen the place and written your name in the little book, somehow or other you seem to be inspired; it kindles up quite a fire within one”. 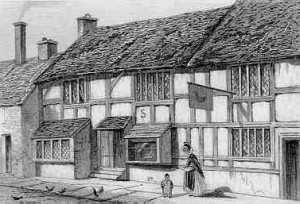 At the time of his visits to the house the Birthplace was still in private hands. Dickens took part in the drive to purchase it for the nation in 1847, being involved in the London Committee that worked alongside the Stratford Committee to secure the building. One of the aims of the 1864 celebrations was to raise funds for a new permanent memorial to Shakespeare. A statue was planned, but Dickens’ sentiment that “Shakespeare’s best monument is his works” held sway, eventually leading to the building of the Shakespeare Memorial Theatre in 1879. 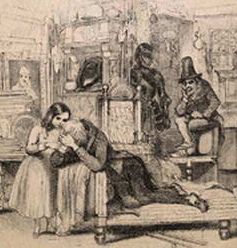 Little Nell and her grandfather

Dickens’ love of Shakespeare is apparent everywhere, from the dedication of Nicholas Nickleby to the great Shakespeare actor William Macready to the performance of Hamlet in Great Expectations. Some links are more subtle. The horrific murder of Nancy by Bill Sykes in Oliver Twist is reminiscent of Duncan’s murder in Macbeth, and Little Nell and her grandfather in The Old Curiosity Shop can be likened to Cordelia and King Lear. Dickens quotes and misquotes from Shakespeare hundreds of times.

As a child Dickens was taken by his father to Gads Hill, the site of Falstaff’s ambush in Henry IV part 1. He fell in love with the place, mostly for its Shakespearean associations, and it was a dream come true when years later he bought the grand house in which he lived for the last ten years of his life.

Following the purchase of the Birthplace in 1847, Dickens continued to be involved with it. He had an impecunious friend, Sheridan Knowles, and came up with the idea of raising money for “the endowment of a perpetual curatorship”, the first incumbent to be Knowles. Dickens decided to raise money with an amateur production of Shakespeare’s The Merry Wives of Windsor, performed by himself and friends, and with typical enthusiasm threw himself into organising it.

Playbill for Dickens' production of The Merry Wives of Windsor, 1848

Forster wrote “He was the life and soul of the whole affair…he took everything on himself, and did the whole of it without an effort. He was stage-director, very often stage carpenter, scene-arranger, property-man, prompter and bandmaster.” Dickens played Justice Shallow, and was joined by George Cruikshank, his illustrator, Mark Lemon, editor of Punch, who played Falstaff, and the compiler of The Shakespeare Concordance, Mary Cowden Clark.

In the summer of 1848 the production visited several cities, including London, Birmingham, Manchester and Edinburgh, and was performed before Queen Victoria. At that time Stratford had its own theatre, which from 1827 to 1872 played host to many touring companies. It stood about half way down Chapel Lane, and was demolished in 1872 to make way for the Great Garden of New Place. There is now no sign of it. 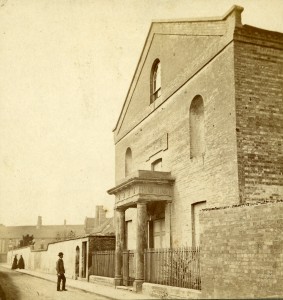 While researching this piece I found evidence that Dickens originally planned to put on one performance in this little theatre. Tucked inside a pamphlet in the Shakespeare Centre Library and Archive is a document dating from 1947 mentioning a letter to Dickens, now in the Forster Archive in the Victoria and Albert Museum, which contains “precise details of the auditorium and stage of the old theatre in Chapel Laneas well as plan[s] of both”. The V&A has confirmed the existence of the correspondence. The idea was dropped when it was decided that Stratford’s proximity to Birmingham might make audience numbers suffer.

For anyone wanting to spend some time finding out more about Dickens, I’d heartily recommend the Dickens in Context section of the British Library website, which includes videos of readings from his books by Simon Callow and images of documents from their collections on subjects relevant to his work and life, like Industrialisation, or Poverty and Wealth in early Victorian England.

Dickens was a man of enormous energy, warmth and love of life. If you want to join in with the celebrations for his 200th birthday, everything you need to know is on the Dickens 2012 website.