Performance history and the critic: Michael Billington’s point of view

A week or so ago Michael Billington of the Guardian, the UK’s most respected theatre critic, and now on twitter @billicritic, wrote a piece about his job. He talked about the challenges of writing a piece that takes into account the fact that the reader may not have seen any other version while also writing a critical assessment of the production’s success. The critic can be simultaneously valued for the insight gained by years of theatre going and damned for it.

It must be particularly difficult with Shakespeare. There’s relatively little need to explain what the play’s about as there is with a new play, and most critics will have lost count of the number of Hamlets and Romeo and Juliets they’ve seen. Avoiding comparisons must be almost impossible.

I’ve certainly read reviews that consist almost entirely of comparisons between the current offering and other productions stretching back decades, usually dull to read and irrelevant for most readers. But there is certainly a place for comparison: a critic’s experience can be invaluable for the student who’s specifically looking at trends in performance.

Comparing two or more productions is an excellent way of studying the play. I spent many years working with the RSC’s archives which extensively documents Shakespeare in performance, at the Shakespeare Centre Library and Archive. Looking at the decisions made by director, designer and actor, examining why they chose as they did, sends students straight back to the play itself: what does Shakespeare actually say?  John Russell Brown, in the introduction to his 2011 book Studying Shakespeare in Performance, writes:
The entire theatrical event should come into the reckoning: the occasion, location and context for performance, the composition and expectation of the audience, the form and equipment of the theatre building, the skill, training and experience of the actors…. A student of the plays must also remember that every reader and critic will bring a unique experience and imagination with them.

In his recent piece, Billington stated how much he was affected by the 1973/4 RSC production of Richard II. Ian Richardson and Richard Pasco alternated the roles of the King and Bolingbroke. In one stroke, the director, John Barton, enforced the point, repeatedly made by Shakespeare, that the role of king dooms the person who takes it. Instead of seeing Richard as a weak king challenged by the stronger, ambitious Bolingbroke, as in most productions, Barton showed them to be mirror images of each other. The mirror in which Richard looks at himself in the deposition scene became the dominant image of the production. 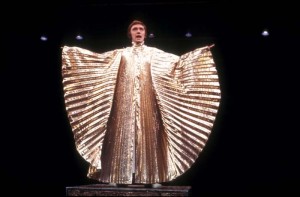 The production certainly gave audiences plenty to think about. Sparely staged in a black box set, Barton’s visual metaphors were used to great effect. For the scene at Flint Castlewhere Richard admits defeat to Bolingbroke he wore a magnificent pleated golden cloak. When he came to the lines:
Down, down I come, like glistering Phaethon,
Wanting the manage of unruly jades…

He held out his arms, and became the setting sun.

Bolingbroke, once King Henry IV, becomes an uncertain figure. His opening speech in Henry IV part 1 is meant to establish the end of civil unrest, but begins in an unmistakeably minor key “So shaken as we are, so wan with care”, and his insistence that there will be “no more” war is quickly undercut by news of unrest in Wales and the north. In Henry IV part 2, his line “uneasy lies the head that wears a crown” could be spoken by any of Shakespeare’s kings. Interestingly Holinshed, Shakespeare’s main source, compares Henry IV’s troubled existence with a classical source, using the same metaphor: “The state of such a king is noted by the poet in Dionysius, as in a mirror”.

Billington is a perceptive critic who balances his years of experience with the ability to see what the director intends, and the judgement to see if it is achieved. Personally, I’d rather see a well-thought production, taking a few risks, even if I disagree with it, than one that’s just “all right”.  As John Russell Brown concludes, “This study is like a sport, worth watching for spectators, enjoyable and sometimes difficult or surprising for participants.”

One Response to Performance history and the critic: Michael Billington’s point of view