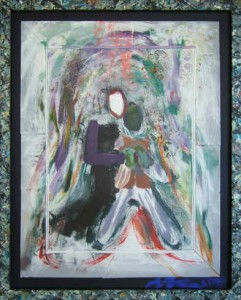 Responses to Shakespeare’s plays come in many forms, and his influence on other art forms such as music, painting and design was explored as part of the British Shakespeare Association’s Lancaster University conference last weekend.

Picturing Shakespeare was one of these sessions, chaired by Stuart Sillars who has himself written several authoritative books on Shakespeare in art and delivered one of the plenary lectures.  Alan O’Cain is a practicing artist and designer who officially observed, both in the rehearsal room and onstage,  the Royal Shakespeare Company’s production of The Tempest in 2006-7 which starred Patrick Stewart. In his engaging talk he spoke about this work, posing the question “What insights can a visual artist bring to interpretations of a play?”

Alan explained how his own idea of the island, gained from readings, was of a deserted and exotic place fringed with golden sands. On arriving at rehearsals, he found that the director was intent on creating something very different. In Dominic Cavendish’s words, Rupert Goold’s directorial vision…conceives Prospero’s island not as some tropical paradise but an inhospitable stretch of freezing Arctic tundra, across which snow is constantly drifting. This world was complete with Inuit costumes and rituals.   Transcribed interviews with the costume and set designers and other information, are on the RSC’s website.

There is some justification for Goold’s choice: Shakespeare doesn’t describe the island in any detail, and teasingly allows characters to contradict each other. Gonzalo finds that “here is everything advantageous to life”, Antonio retorting in an aside “True; save means to live”. I’ve written before about how English seafarers were exploring the Arctic region during Shakespeare’s lifetime, even undertaking whaling on the Svalbard archipelago at 80 degrees north. It’s perfectly possible that Shakespeare knew of this inhospitable but magical landscape, where gathering firewood is indeed an essential part of life.

Shakespeare deliberately encourages actors and audience to imagine their own island. While the literal choices are either the West Indies or the Mediterranean, stage productions and films have found much more inventive solutions such as Janice Honeyman’s 2009 spectacular post-colonial production for the Baxter Theatre Company in Cape Town, located in South Africa. 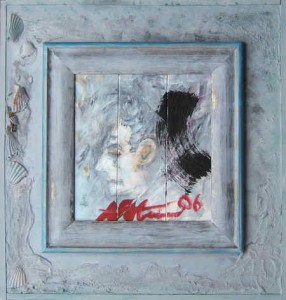 The figure of Ariel in Alan O'Cain's painting My Liberty

Alan found Goold’s view of the island required a dramatic readjustment of his ideas about the play. He also had to find a way of representing the energy of the actors in rehearsal, and explained how difficult it was to sketch the constantly-moving actors, producing notebooks to catch significant moments, and how he eventually produced the fourteen artworks that were his response.

The figure of Ariel was key. Again, Dominic Cavendish describes how Julian Bleach, in a “chilling and wonderfully restrained performance”, is 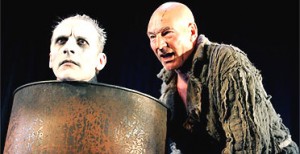 A figure of Beckettian austerity – white-faced, black-garmented, unsmiling – Bleach creeps around the stage clutching an hour-glass, his handheld countdown to personal liberty. How greatly he craves that freedom is communicated by nothing more extravagant than his haunted eyes. 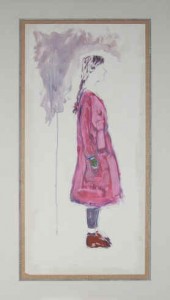 Alan O'Cain's portrait of Miranda: Do you love me?

And Kate Bassett wrote about Mariah Gale’s interpretation of Miranda, “sweetly gawky…, stiff with isolation”.  As Alan put it, “If the artist is an expressionist he will aim to capture the direct personal emotional impact of what he sees before him”.

Alan O’Cain offered a compelling insight into the challenges of being an artist in interpreting not only Shakespeare’s play, but a production of it. Do take a look at the evocative Images of all the paintings he created, and listen to his talk on the subject given to the Shakespeare Institute in October 2011, recorded by Backdoor Broadcasting.